This week, the Social Security Administration (SSA) said that Social Security Benefits will increase by 5.9% in 2022. These Cost-Of-Living Adjustments or COLAs are made annually to counteract inflation. Since 1975, Social Security's general benefit increases have been based on increases in the cost of living, as measured by the Consumer Price Index. COLA is an important factor to track when managing a financial plan, before and during retirement.

The most recent COLA increase is the biggest jump since 1982 and is welcome news to the approximately 70 million Americans who receive benefits. The coronavirus pandemic continues to impact the economy. Prices of everything including food, rents, and other products have increased driven by high demand, reduced capacity, and supply chain bottlenecks. 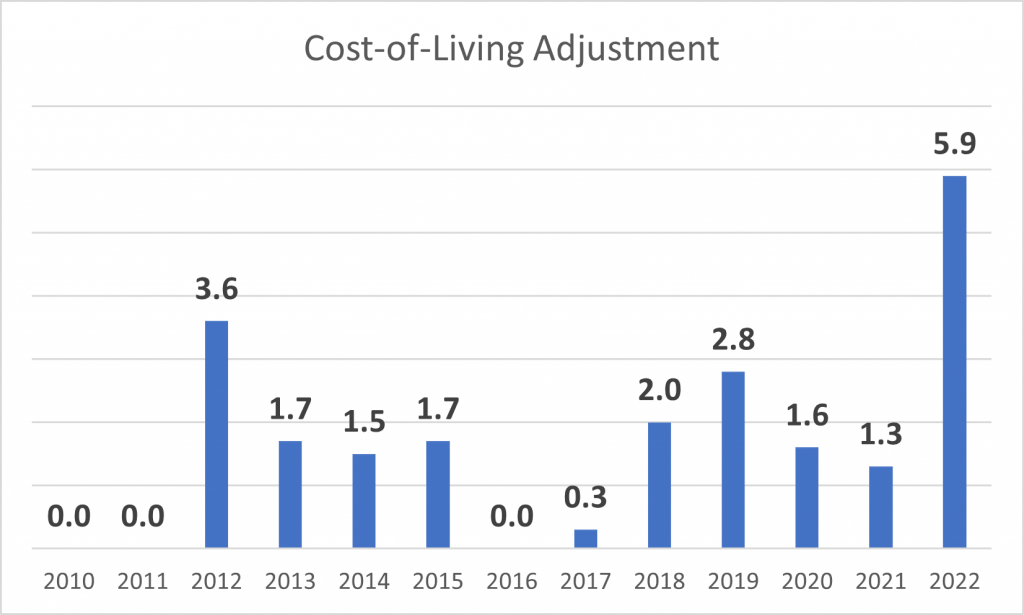 To provide context, I looked at the SSA's annual cost-of-living adjustments since 1975 and found the average COLA increase over the past 5 years has been 1.6%. During the 1990s, low inflation rates resulted in small COLA increases averaging 2% to 3% per year. Following the financial crisis, there were no COLA increases in 2010, 2011, and 2016. According to the The Senior Citizens League, Social Security benefits have lost nearly one-third of their buying power since 2000. Next year's increase should help close that gap, but concerns remain over the magnitude and impact of near-term inflation.

While the Federal Reserve Bank has maintained that inflation is transitory, the COLA increase is another thing to watch. There are signs that we could be living with inflation for a while. The next COLA will be announced in October 2022.

How do you feel about the COLA increase? Will it be enough?