3 Bubble Warnings to Listen to Before It’s Too Late

It's time to listen to the best and brightest. The world's economies are stagnant or weakening while the stock market is overvalued. The time has come to be conservative. Most investment firms do not place importance on asset protection. Runnymede is an exception; we take asset protection very seriously. As such, we devote much time to market analysis and will make changes when necessary depending on our clients' objectives.

Here are 3 bubble warnings that experts are telling you to take note of right now.

Having made his billions during the last tech bubble, Mark Cuban has intimate knowledge of the tech sector. In March 2015, he wrote “The bubble today comes from private investors who are investing in apps and small tech companies.”

He concludes that the current environment is worse than 2000. Why?

That quote sounds like what set off the 2008 crisis. People had bought illiquid MBS and couldn't get out when the market was collapsing. Investors should never buy illiquid assets that have no price and no liquidity.

In addition to Cuban's thoughts on the private investing space, the stock market has been led in 2015 by the tech sector. Netflix, Amazon and other technology stocks have marched higher and higher. But one could easily argue that we are seeing another bubble in the public markets as well as the private space. Forward PE ratios are starting to look crazy. NFLX is trading at 482x. AMZN is at 157x. They make Facebook look cheap at 40x.

Snapchat CEO Evan Spiegel said that years of near-zero interest rates have created an asset bubble that has led people to make “riskier investments” than they otherwise would. He said that a correction is inevitable.

Jeremy Grantham: Bubbles are the only thing that matter

Jeremy Grantham is the founder of the $118 billion asset manager GMO. Although widely respected, his gloomy outlook often clashes with the industry's overly bullish attitude.

Recently Grantham said that corporate profits are “abnormally high” and will revert to the long-term average. There is a “huge debt overhang” and the financial industry is “a bloodsucker, I'm afraid to say.”

Bubbles are the only things that matter. The rest of it is boring. You show up for work, markets are at normal levels, and there's not much you can do. It's all trivial. But in a great bubble you can get your clients' arses out of the way, and the money you can save can be quite legendary.”

Runnymede firmly believes in this message from Grantham. Being able to protect your assets before a crisis hits is imperative in today's market environment. If you can just protect part of your assets in the big declines, you will come out miles ahead over the long run. 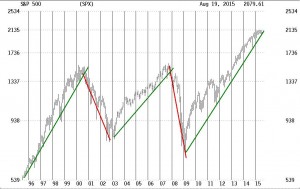 Last week I discussed that Shiller's CAPE ratio is pointing to an overvalued stock market. While Shiller isn't pounding on the table telling everyone to sell, his CAPE ratio does suggest that all investors shouldn't be taking excess risk at this time.

Typically bubbles have an asymmetric shape. The boom is long and slow to start. It accelerates gradually until it flattens out again during the twilight period. The bust is short and steep because it involves the forced liquidation of unsound positions. That is why it is important to take defensive positioning early because you don't know how fast the downdraft will be.

The chart below utilizes Dr. Robert Shiller’s stock market data going back to 1900 on an inflation adjusted basis with an overlay of the asymmetrical bubble shape. It is time to be defensive. 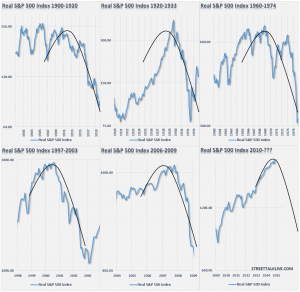 Are you taking defensive action? Share your comments below.

“Mark Cuban” by Gage Skidmore is licensed under CC BY-SA 2.0