Show Me the Money: Where did the Fed’s QE money go?

Most people believe that when the stock market is going up, the economy must be doing well. The argument was generally true in the 20th century. Now a days, things are different in the era of the New Normal. So far in the 21st century, when both the bond and stock markets are cheering, the economy may actually be slowing or operating below trend.

The Role of Money

In our MV=PT framework as discussed last week, we would like to explain further about the role of M. Money has two major uses 1) for transaction demand and 2) speculative demand. The business sector has the buying power and therefore, always has the first call on M (money) in the economy. When business conditions are favorable or promising, businessmen can get aggressive, bidding up the cost of money and are willing to pay higher interest rates. Businesses in essence create the transaction demand for money. Since all interest rates — short, intermediate and long-term interest rates — have been falling since 2007, this trend alerts us that demand for money from business is weak and the participants are worried about the outlook. This can also be seen when looking at bank deposits parked at the Fed. Instead of finding loan growth and stimulating the economy, $2.8 trillion is just sitting stagnant. 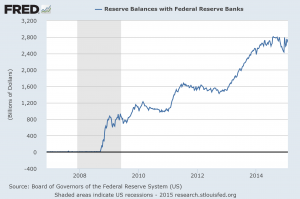 The economic system is bloated with money as the Federal Reserve, which seems out of touch with the changing world, has injected $4.2 trillion into the economy over the past 6 years when demand for M was weak, putting great downward pressure on interest rates. When money can’t be used by businesses to finance inventory and capital spending, it flows to the speculative arena pushing up valuations of bonds and stocks in spite of the weak fundamentals. Looking at the Warren Buffett valuation model over the past 20 years, it confirms that the Fed has created a third speculative bubble. 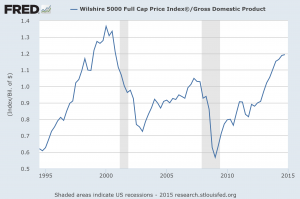 One major challenge to all investors is that the size and duration of the bubble cannot be easily estimated especially when foreign money has become a major factor. Immediately after the Fed stopped its QE3 in October 2014, both the Japanese and European central banks expanded their asset buying programs and are pumping billions into the world financial system each and every month. Since foreign economies are weaker than that of the US, money will be converted immediately from their currencies to the US Dollar. Then, investors will put those Dollars to work which will in turn create speculative demand for our stocks and bonds. This phenomenon could be a major driver for the US bond and stock markets in 2015 despite the fact that the US economy will likely be slowing.