In the first quarter, US companies returned a record amount of cash to shareholders via stock buybacks and dividends. This trend has helped drive the stock market's record-setting rally; but is this a good or bad sign for the bull market going forward?

Stock buybacks and dividends surpassed $241.2 billion in the quarter, exceeding the previous record set in the fourth quarter of 2007 of $233.2 billion. Companies aggressively bought back shares to the tune of $159.3 billion worth of stock during the first quarter, up a staggering 59% from a year ago and 23% from the fourth quarter.

Buybacks increase demand for company shares and also increase a company's earnings per share by reducing the supply of stock. It is no surprise that companies that buyback stocks tend to outperform the overall market because of this effect. The S&P 500 Buyback Index, which tracks the 100 shares with the highest buy-back ratios, has nearly doubled since early 2008 versus a gain of 30% or so by the S&P 500 over the same time period.

It is important to understand the positive effect buybacks have on earnings. So far in the second quarter, over 20% of the companies reporting have reduced their year-over-year share count by at least 4%. Investors need to compare the net and EPS change so they can see where the growth is coming from. Most people would be willing to pay more for a company with “real” growth in net income rather than a company that is getting a large portion of its growth through buybacks.

One example is Apple. In their last quarter, Apple grew its net income by 12.3%, but thanks to buybacks, its EPS growth was a robust 19.6%. They reduced share count by 6.5%!

JP Morgan studied this effect for the broad market and noted that a stunning 60% of S&P 500 earnings growth was fueled by stock buybacks between the third quarter of 2011 and the first quarter of 2013. Companies have used cheap debt to buyback shares and boost earnings in a time where revenue growth has been tough to come by.

The first quarter 2014 buybacks were the second largest in history. Unfortunately, the biggest quarterly buyback was in the third quarter of 2007 which turned out to be a near perfect signal of the last market peak. Poor timing by company executives. 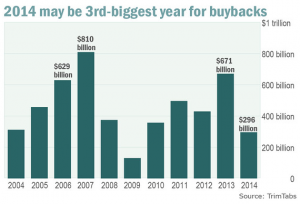 In July, $55 billion in new buyback programs were announced and so far in 2014, close to $300 billion in buybacks have been announced. This year may come close to 2013's total but it will likely fall short of the all-time record hit in 2007.

If you are still bullish, how can you play the buyback bonanza? One strategy is to buy the companies with the biggest programs. In 2014, the biggest announcements have come from Apple, Intel, Wells Fargo, Caterpillar and Monsanto — all with buybacks of $10 billion or more. Another option is the PowerShares Buyback Achievers Portfolio (ticker: PKW) which is based on the NADSAQ Buyback Achievers Index. This index is comprised of the corporations that have effected a net reduction in shares outstanding of 5% or more in the trailing 12 months. It has handily outperformed the S&P 500 in periods of 1, 3 and 5 years; however it has lagged so far year to date.