As we look back on 2013, investors will smile wide at the US stock market indices hitting historic highs. Not only did US markets have an outstanding year but they doubled the return of international indices. The once popular BRIC investing theme actually finished with 3 of the 4 BRIC countries in the red. The countries that went bankrupt in the financial crisis rose from the ashes as Greece, Ireland and Iceland were all up over 29%. Volatility was crushed by the running bulls as the VIX was down over 30%.

In commodity land, it was a mixed bag. After an epic bull market run since 2000, gold and silver corrected into bear market territory. Runnymede correctly called this in our 4th quarter 2012 strategy as we stated:

Finally, what about gold? After a 12-year meteoric rise, we think gold will rest a bit in 2013 as downside risks fade. In the next recession, gold will likely leap again when central banks fight to devalue their currencies by printing even more Dollars, Euros and Yen. For now, though, we prefer to own equities over gold.

Bonds had a historically bad year both in terms of performance and outflows. With 10-year Treasuries hitting a 2-year high and the Fed finally tapering, bond mutual funds saw over $70 billion in outflows which tops the previous worst year on record of 1994 which saw $63 billion in outflows. With economists forecasting the Fed winding down its monthly purchasing program in 2014, rates will likely rise further in the New Year. When investors open their statements and see the mounting losses in their bond funds, more redemptions will follow. This should be a positive tailwind for stocks as the money will flow into equity mutual funds. 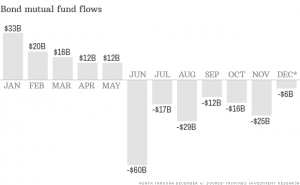 Who was the fairest of them all?

While the US markets had a stellar year, the biggest winner was Venezuela's Caracas General which increased a mind boggling 481%! With only 15 stocks in their index and not much in terms of fundamentals, market participants can thank the fear of currency devaluation which resulted in parabolic returns. Of course this isn't very pleasant when local Venezuelans are facing over 50% inflation rates. Since there is no Venezuelan ETF, you probably missed out on this one.

The winner in developed markets was Japan. A hat tip to the money printing king Shinzo Abe who printed as fast as the US Federal Reserve and even bought ETFs when buying bonds wasn't enough. While this will likely end horribly, the Japanese celebrated in 2013 to 50%+ returns.

Who do you think will have the best returns in 2014? Happy New Year!