Are you missing the hottest investment on the planet right now?

I remember hearing about bitcoin for the first time about four years ago when there was news that someone used the digital currency to buy a Tesla Model S for $103,000 which was the equivalent of 91.4 bitcoins. That buyer may have a bit of remorse because if he held on to his digital currency, it would be worth roughly $260k today. This year the cryptocurrency is up 193% and it is up almost 4x in the last year. It has become one of the hottest investments of 2017. Now the question is: should you be a buyer or is it a bubble?

Bitcoin is a digital currency invented by an unknown programmer under the name Satoshi Nakamoto. The system is peer-to-peer, and transactions take place between users directly without an intermediary like in a credit card purchase. These digital transactions are verified by network nodes and recorded in a public distributed ledger called a blockchain. Here is a short video primer by the Guardian.

The most prominent believer in bitcoin is the co-founder of Netscape Marc Andreessen who has touted the technology for several years now and has $50 million invested in bitcoin startups. It is important to note that he is investing in companies that are building the services around the digital currency like exchanges and transactional companies and he is invested minimally in the digital currency itself. This is a key distinction to recognize as he is clearly a huge proponent of blockchain as he believes it is a truly disruptive technology. With bitcoin, he believes that it can begin to provide real value to merchants and consumers because it provides a solution to pain points like credit card fraud, high transaction fees and chargebacks. He wrote a long editorial piece in the NY Times called Why Bitcoin Matters back in 2014 that is worth a few minutes of your time.

Jeremy Liew, the first investor in Snapchat, and Peter Smith, CEO and cofounder of Blockchain, are huge bulls on bitcoin and recently laid out their case for the currency to explode to $500,000 by 2030. Like Andreessen, their primary case is on remittance transfers, or electronic money transfers to foreign countries, which have almost doubled over the past 15 years to 0.76% of gross world product. Financial companies often charge 10% for such transactions which would drop to close to zero with bitcoin.

The bears: highly volatile and risky

Bitcoin is a volatile currency that should be considered highly speculative. Even though it has been flying high so far this year, in the past it had violent corrections. While bitcoin is supposed to be secure, there have been several incidences of large scale theft. In 2014, the exchange Mt. Gox, which is one of the oldest virtual trading venues, had to halt trading after hackers stole over 744k bitcoins or roughly 6% of bitcoins in circulation. Prices fell over 40% in just one month. 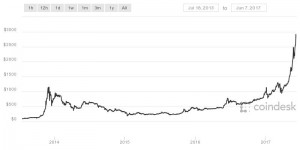 Billionaire Mark Cuban fired off several tweets on Tuesday night calling the current prices a bubble. When charts look like the one above, I would tend to agree. Never buy on a parabolic move. That will likely end in tears.

I think it's in a bubble. I just don't know when or how much it corrects. When everyone is bragging about how easy they are making $=bubble https://t.co/hTrV5DeWNd

Warren Buffett says to “stay away from it. It's a mirage, basically.” I would just caution that Buffett has never been a fan of technology in general and has typically avoided the tech sector entirely in his investment portfolio.

Bitcoin still has many years to go until it becomes mainstream, if it ever gets that far. There are many competing digital currencies that are also emerging. So will bitcoin become the MySpace or Facebook of digital currency or will they all go down in flames? The biggest obstacle for these emerging currencies is that the almighty Dollar, Yen and Euro do not want a serious competitor. The forces that be want to be able to control the printing presses which equates to incredible power. If they want to crush the digital currencies, can they just shut them down with legislation?

In the end, there are too many unknowns to consider this an investment. It is more of a commodity which is inherently hard to value. As long as there are more buyers than sellers, the price will go up; but it sure looks like a bubble for now.

Do you own Bitcoin? Would you trust a digital currency? Let us know in the comments below.