Bitcoin mania will end in tears

Unless you are living under a rock, you surely have heard of bitcoin as it surpassed the $10,000 mark yesterday and briefly topped $11,000. You may have no idea what it is or how it works but the stories of kids turning into multimillionaires in short order are undoubtedly tickling your greedy side. We are all human and can't resist the thought of turning a few dollars into millions and then enjoying ourselves sipping a drink with a tiny umbrella on some exotic beach. But please heed my warning. The bitcoin mania will end in tears for most investors (especially those considering buying late in the game) and unless you are in it for a quick buck and trade, then please don't give into temptation.

This time is different

Back in 1999, I was assistant portfolio manager for the CREF Growth accounts which had over $12 billion in assets. I was tasked with covering initial public offerings (IPOs) for technology companies because the internet mania was in full bloom. The internet was going to change the world and put all the brick and mortar stores out of business. It no longer mattered if companies were losing millions of dollars and had no earnings, sell side analysts created a new metric – eyeballs. As long as companies had people visiting their website and that number was growing then their stock price was skyrocketing. Retail investors chased all the hot tech names like Qualcomm and Cisco. Barbers, taxi drivers and all the party conversation was about how much money they were making and shared their hottest stock tips.

CREF had never participated in IPOs historically but we couldn't leave free money on the table. I attended hundreds of rubber chicken lunch roadshows and had stacks of prospectuses in my office. All of the new IPOs were losing money but it didn't matter. The offerings were usually for about 2 million shares and the deal would be 20-50x oversubscribed. We would put in for our share of the deal and get maybe 10-20k shares. While the offering price range would typically be $12-14, the stock would price at $20 and begin trading at $40+. We made 100%+ instantly and immediately sold the stock.

It was a bizzaro world. At our afternoon meetings, all the senior analysts shook their heads in confusion as they couldn't make sense of technology stocks with negative earnings going up each and every day. High quality stocks with actual real earnings streams were selling off. The younger guys were enjoying the ride and said it was a new economy. We said that this time is different. Of course it wasn't. In hindsight, it was obviously a bubble and it popped.

I didn't think I would see another crazy bubble like the tech bubble of 1999-2000 but it is clearly happening again but this time with no regulation at all. That is a scary thought. Instead of IPOs, there are initial coin offerings (ICOs). Even celebrities are getting in on the action — Paris Hilton and Floyd Mayweather recently touted an ICO called Lydian. Now on Yahoo Finance, you can see prices for over 100 cyrptocurrencies. I have no idea how you trade most of them but I can assure you that 99% of them will be worthless in the end just like 99% of the IPOs I flipped back in 1999 went bankrupt.

I'm not a cyrptocurrency expert and I don't own any myself. However I've read up on the subject and listened to experts to get myself up to speed. I do believe that blockchain technology is significant. However this is still so early in its adoption that no one knows who the winner will be. Remember during the tech bubble in 1999, many of today's technology giants didn't even exist. Facebook wasn't founded until 2004 and Google was founded in late 1998. Perhaps Bitcoin survives and thrives or it becomes like MySpace and goes to zero. Only time will tell.

If you don't believe my analogy between tech and bitcoin, I would like to quickly use Qualcomm as an example. In 1999, Qualcomm stock went up 2500%. Yes that is even better than bitcoin's one year rise of 1200%. I still remember the now infamous PaineWebber analyst issuing a price target on Qualcomm of $1000 in December 1999 – the stock went up 30% on the news. Yes 30% in one day! That pretty much nailed the top of the internet bubble and it was all downhill from there. Today some bitcoin advocates are calling for targets of $100,000 or more. The WSJ wrote an article titled, “Bitcoin Mania: Even Grandma Wants in on the Action.” I love this quote from the grandma, “I thought it was a big coin. I didn’t even know what it was, a piece of coin? Why would I invest in a piece of coin?” The bizarro world is back and its called cryptocurrency. 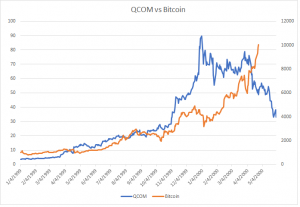 This probably isn't yet the end of the bitcoin bubble. Coinbase is reporting huge amounts of new accounts opening in recent days and in the US, Google searches for bitcoin are 6-7x greater than those for Kim Kardashian. However I would guess that we are late in the game, not early in terms of the bubble expansion.

The team at DataTrek Research did a great analysis on the potential size of the market. Their question is: what is the appropriate share for crypto currencies like bitcoin in a market defined as fiat currency (aka dollars, yen, euro, etc) + cyrpto? At current levels, bitcoin's share is 8% and all cryptos combined have 15% share. If bitcoin went to 20k, it would move up to 14% share and at 100k, it would have 33% share.

Do you own bitcoin or other cryptocurrency? Do you think it is a bubble?