5 simple steps to protect yourself from the Target data breach

This past month has been an unwelcome reminder that identity theft is on the rise. Target and Neiman Marcus are the two high profile retailers whose networks were breached over the holiday season; however at least three other well-known smaller US retailers were breached. Target has already reported that 70 million to 110 million of its customers had their information stolen including credit card numbers, names, addresses, phone numbers and PIN numbers. That is a staggering figure as that represents a third of all American adults on the low end, and is nearly three times as great as the company's original estimate at the high end. Fraud experts said that information stolen from Target's systems quickly flooded the black market.

According to Javelin Strategy, 1 in 4 data breach notification recipients became a victim of identity fraud in 2012. This isn't good news for those affected by the holiday data breaches. Therefore, it is imperative to be proactive to protect yourself. You don't want to spend hours, weeks or even months trying to resolve problems. 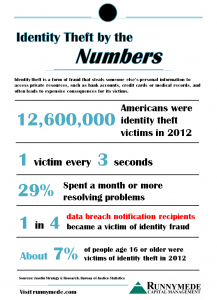 Safety Tips to Protect Yourself

1) If you believe your debit card was exposed then immediately request a new card!

With credit cards, you have limited liability – typically just $50 and that is usually waived. However with debit cards, you must act quickly in order to avoid full liability for unauthorized charges. Target will likely be held liable for unauthorized usage in this situation but why take any chance here. It isn't worth the hassle or worry.

2) Get a free fraud alert on your credit report

This is an easy and free service provided by all the major credit agencies. Simply go online and fill out the form. This service lasts for 90 days but can be renewed free of charge. Just set up a reminder for yourself so you are fully covered. This will prevent others from opening credit cards in your name.

While many of the services provided by identity theft protection services can be done on your own, service providers like LifeLock and PrivacyGuard make it easy and many offer $1 million insurance guarantees as part of their offering. If you register before April 30th, Target is offering free protection for one year with ProtectMyId which is owned by Experian. Everyone should take Target up on this free offer. To sign up, visit Target, ProtectMyId or simply go here.

The downside is that ProtectMyId is a very basic level service and only monitors Experian credit reports and ignores the other majors. If you want more coverage, you can choose a more premium service like PrivacyGuard or LifeLock which monitor all credit reports, black market websites, bank account takeovers and more.

PrivacyGuard is advocated by Frank Abagnale whose story was featured in the movie Catch Me If You Can. LifeLock is considered the industry leader and is a public company with solid financials. They are well known for their CEO Todd Davis regularly giving out his Social Security number in advertisements to prove how effective their service is.

4) Check and monitor your statements

This one is the obvious one. Check your credit card and bank statements for any fraudulent activity. Look for any suspicious purchases and any activity that you didn't authorize.

This is a difficult thing for people as we tend to post everything on Facebook, Google+ and Twitter. Over sharing makes it easier for identity thieves and they have easy access to your information if you aren't careful. First and foremost, don't post your birthday or hometown online. At the very least, tighten your privacy settings. The less you share, the safer you will be. Keep in mind that social network users have a higher incidence rate for identity theft than the national average. In Javelin's 2012 Identity Fraud Report, LinkedIn users were twice as likely to report identity theft.

Hope that you take these easy steps to protect yourself. If you have more tips, please share them with us.