Back in August, I gave you “3 Reason Not to Fear the Taper” because I didn't feel that the Fed reducing bond purchases would hurt the market. While the taper hasn't been on for long, US stock market indices are trading near all-time highs which confirms my call. Today I wonder aloud, “Is the Fed tapering fast enough?”

This week, Fed Chair Janet Yellen stayed on course and decreased asset purchases by another $10 billion to $55 billion a month. Expectations are for similar cuts at subsequent meetings with asset purchases ending sometime in the 4th quarter. This could change if the economy weakens but for now the Fed seems content at a measured decrease in asset purchases. The committee has been very reluctant to change policy quickly because they worry that the economy is still fragile. Should the Fed be so cautious?

While Quantitative Easing is a new experiment, we actually have another economy to look to as a model, albeit one with only a bit of history. The European Central Bank, ECB, made huge asset purchases to prop up their banking system in 2011/2012. In April 2011, the ECB balance sheet held assets of 1.9 trillion Euros. This ballooned to 3.1 trillion Euros in June 2012. But once the banking system stabilized, the ECB aggressively decreased the size of their balance sheet to near its original levels. They didn't do a slow and measured taper like the Fed. 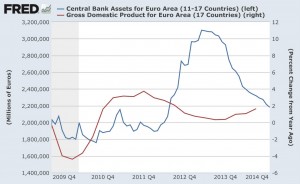 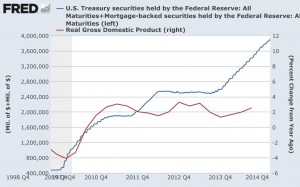 Looking at the chart above, it is arguable that the Fed's recent asset purchase program has had much effect on the US economy. The Fed balance sheet has ballooned to over $4 trillion but US GDP growth has barely moved above 2%. Frankly, Bernanke should have started tapering in mid-2013 and Yellen would actually be in a better position today. If the economy slows now, where is the upper limit on the Fed balance sheet? Would Yellen be comfortable with a $5 or $6 trillion balance sheet? I hope that we don't ever find out.

Should the Fed taper faster? Should it begin to unwind its bloated balance sheet?