What does Irving Fisher’s Equation of Exchange tell us about 2015?

Irving Fisher, who was one of the well-known economists of the early 1900’s, came up with the “Equation of Exchange” concept. In its time, it became a landmark theory and today, many people still consider the equation to be one of the most important theories of economics.

That equation was MV=PT to explain the key relationships as to how these variables interact with each other and the economy. M is the money supply. V is the velocity of money. Essentially this says how quickly the money supply is turned over. P is the price level.  T is the aggregate transactions. So MV = PT means that the total transactions at the current price level is equal to the total money stock multiplied by how often it is turned over.

This formula is not a mathematical model that can forecast in quantitative terms; however, it provides a conceptual framework to help one understand the interaction of these four critical variables, explains anecdotally and also gives one a feel for the direction, strength or weakness of the economy.

Let's first look at the MV side of the equation. In our fiat economy, M is altered by the action of central bankers. The policies and action of the Fed and the Treasury, rather than the market, determine the level of M. In the past several years for example, we witnessed the Fed’s quantitative easing which injected trillions of dollars of liquidity into the financial system but the economy responded modestly due to the steady decline of money velocity since over the past 15 years (see chart below). Using Fisher's concept, we were not surprised to see that the GDP growth over the past four years was subpar. 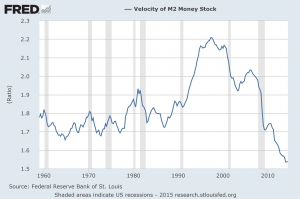 Looking at the other side of the equation PT, we currently see that P can be exemplified by commodity prices i.e. oil, natural gas, copper, steel, coffee, corn etc., which have fallen dramatically since July 2014. T, represented by industrial production, is holding steady on trend and expanding around 5% year over year. There is no sign of a recession at the moment but we have to watch closely because the housing, auto and capital spending sectors are losing momentum.

Our guess is that based on the “Equation of Exchange,” overall economic growth will likely be modest in 2015. Falling P and V is not a good sign, shows something is very wrong and suggests structural weaknesses in the economy. M has skyrocketed (the only thing the Central bank knows how to do) but gets little traction while T is still holding. Fisher’s equation is like using a slide rule, that is neither a calculator nor a computer but in the world of dismal science it’s a pretty useful method that gives you a feel for the economy and its direction simply and easily.