Will Kim Jong Un blow up the bull market?

Yesterday the rhetoric between the US and North Korea escalated further with President Trump saying the US would “totally destroy North Korea” if forced to defend itself or its allies. He said that while the US “has strength and patience,” its options would soon run out. This follows the president's comments from August 9th when he said “North Korea best not make any more threats to the United States. They will be met with fire and fury like the world has never seen … he has been very threatening beyond a normal state. They will be met with fire, fury and frankly power the likes of which this world has never seen before.” So far the markets have shrugged it all off, but can Kim Jong-un sink this long running bull market?

In contrast to Trump, Kim Jong-un has done more with actions rather than words. North Korea supposedly conducted a nuclear test on September 3rd – creating a huge blast with the US Geological Survey reporting an earthquake of 6.3 and stated it seemed like an artificially created event. In addition on July 28 and September 15, North Korea fired ballistic missiles into the sea of Japan.

This all sounds bad but it really is par for the course for North Korea. Every year they shoot some missiles in the vicinity of South Korea. In 2013, they did several tests in March and May. In 2014, North Korea fired missiles into the sea in March, July and September. In 2015, they fired missiles in March and August. As one can see, this isn't really new and unusual behavior. In fact, it is typical for their regime, therefore, the markets seem to be making the rational decision to think this isn't a big deal, until proven otherwise.

It makes sense to look at the South Korean stock market for any clues and thus far, their financial markets are also doubting the rhetoric will turn into war. This year their stock market is up significantly (+31%) and has barely reacted to any of the missile launches or nuclear test. The South Koreans would be in the most danger in any conflict because Seoul is just 120 miles from Pyongyang; and is just 35 miles from the North Korean border. In contrast, the closest US state to Pyongyang is Hawaii which is over 4600 miles away.  At this point we view the risks in the Korean peninsula to be extremely low but we will continue to monitor the geopolitical landscape closely. 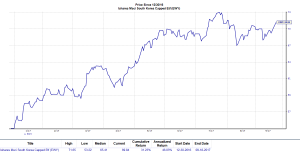