Is war good or bad for the stock market?

This weekend, the crazy dictator in North Korea stepped up the insanity by supposedly testing out a hydrogen bomb. Whether they actually did this is debatable but the rhetoric is going beyond words with missiles and bomb tests. What Kim Jon Un is trying to accomplish is anyone's guess because he isn't winning any friends with ballistic missiles over Japan or nuclear tests. We just hope that a strategic miscalculation doesn't lead to a serious war.

As money managers, we have to decipher whether this is good or bad for the stock market. In April, Barron's Mark Hulbert wrote a piece titled “War is Hell – but Not for the Stock Market.” Is this true?

War is positive for stocks

Hulbert argued that much of that uncertainty gets resolved soon after U.S.-led hostilities begin, and that’s why the stock market typically soars in response. This probably makes sense when you look at the last thirty years because the conflicts were mostly short and targeted strikes. Our opponents were small countries with little resources. War is more palpable when you have the odds stacked in your favor. No one wants to fight a war that they will likely lose. Hulbert analyzed the market's reaction to the following incidents:

These are the results that he found:

If North Korea continues on the path of insanity, the US and other nations could choose to seek out regime change via military conflict. While we don't want to waste our resources, if they truly have nuclear weapons, then it would be in everyone's best interest to get them out of the hands of a crazy dictator though it may be easier said than done. Luckily they are tiny country with little resources and no one will come to their aid given current circumstances. Remember that by comparison, in one day, the US makes up over 2x the size of North Korea's annual GDP. Given our size advantage, the conflict would hopefully end quickly.

World Wars and long wars are bad for the markets

The study by Hulbert didn't really look at the World Wars, nor protracted wars like Vietnam and the war on terror. If you look at these examples, it is quite clear that war isn't good for the stock market at all. We believe it is because wars suck up valuable resources for destruction, not building long lasting growth. These wars also caused higher inflation which is bad for consumers. In turn, extended periods of war isn't good for anyone (except the defense industry) and especially not the stock market. Here is a chart from stock trader's almanac. As you can see these major wars caused sideways action in the Dow Jones Industrial Average and higher CPI.

Are you worried about potential war with North Korea? How are you positioning your investment portfolio? 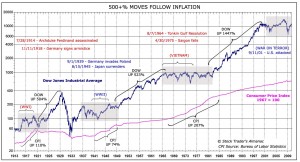