A Lesson from Warren Buffett on Buying Fear Revisited

Last year in February, I wrote a blog post entitled “”A lesson from Warren Buffett on buying fear.“” The S&P 500 was down 5% from its high and the negative headlines focused on slowing global growth and worries about the Fed tapering. If you had bought on that day, you would be up over 20% on your investment!

Last October, I referenced fear again when CNN Money's Fear and Greed Index hit 0, which was the first time it was that low since 2011. It was just two days from the market's interim bottom and if you had bought on that day, you would be up over 10%!

Buying fear is a worthwhile strategy. Don't just take it from me, listen to Warren Buffett.

This seems to be a simple rule but even Buffett admits that it is easier said than done. “There is no comparison between fear and greed. Fear is instant, pervasive and intense. Greed is slower. Fear hits.”

An interesting investor sentiment indicator is called the Fear and Greed Index from CNN Money. During a bull market cycle, buying in times of fear make for great buying opportunities. Right now it is once again registering Extreme Fear. Here is a chart since 2012: 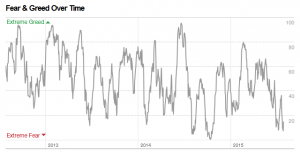 Over the last month, the media has been infatuated with the negative headline risks of Greece and China. At Runnymede, we aren't overly concerned about either of them. Today the S&P is off just 3% its highs but with the fear in the market, it appears that Mr. Market is giving you another interesting buying opportunity. On the negative side, the bull market is running on tired legs and is the 2nd longest bull market since the end of WWII. But with central bankers still running the printing presses hot, there still appears to be upside in this market.

Are you buying into this decline or locking in your profits from last year? Please leave your comments below.