Welcome to our Asset Protection 101 series. With exception to diversification, the industry doesn't like to talk about asset protection because it goes against conventional thinking and the way that most advisors operate. However, one size doesn't fit all clients so we will take on these topics in this series.

Buy and hold refers to an investment strategy in which investors hold on to their stocks for a long period of time regardless of fluctuations in the market. One of the main benefits of a buy and hold strategy is the easiness of the process. It is no surprise that Wall Street pushed this message as they no longer had to make the tough decision to actually protect client assets before a bear market. Lucky for them, the market had a huge secular bull market from the mid-1970's to 2000 as interest rates declined from the mid-teens to single digits and the stock market had an epic run in the 90's culminating in the Internet bubble.

So when doesn't buy and hold work?

The theory behind buy and hold is that, in the long term, most investments end up providing a good return, even if they seem to decline over short periods of time. This is overly simplistic and you shouldn't treat it as gospel. The key factor to successful buy and hold strategy is selecting which companies will be around long-term. It is important to buy the right company at the right price. Warren Buffett is often the role model of success for buy and hold but you should realize that Berkshire Hathaway is an active manager of its portolio holdings and regularly adds and subtracts to positions.

Being a long time New Jersey resident, I know many people that worked for Bell Labs which was spun out by AT&T and named Lucent Technologies. Lucent was a darling of Wall Street in 2000 and hit $86 a share. Everyone was overjoyed with its high growth rate and wanted to hold onto their stock forever. Then the tech bubble burst and in 2002, Lucent fell to just $2. No investor would be happy with those returns and it never recovered above $20 again. Today it trades as the merged Alcatel-Lucent at just $3.89.

Sure individual stocks will go bad from time to time, but others investors will argue to just buy an index and hold it forever. The whole market will go up and up forever, no? First let’s have a look at Japan. 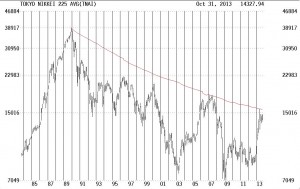 Forget about lost decade, Japan has lost two decades and is dealing with a massive problem of low birth rate and aging population. The US doesn't have the same problems as Japan but nonetheless, since 1997, the US market has basically been in a sideways pattern.

Just looking at this chart, it is easy to see that a pure buy and hold just didn't make sense during this time period. If you just protected part of your assets during the two major bear markets, you would come out in a far better financial position and with far less stress.

Today we are trading at all-time highs again but the market is looking a bit frothy. Blackrock's Chief Executive Officer Larry Fink, whose company is the world’s largest money manager with $4.1 trillion in assets, said Federal Reserve policy is contributing to “bubble-like markets.” Fink said, “We’ve seen real bubble-like markets again. We’ve had a huge increase in the equity market. We’ve seen corporate-debt spreads narrow dramatically.” The Fed is printing $85 billion per month and short rates are at zero. What will they do if there is a recession in 2014? When the next bear market comes, you better protect at least some of your assets because it will likely be a nasty one. 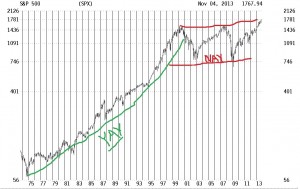