I'm calling it right now. 2015 is the year that cable TV cord cutting finally reached its tipping point. For so many years, consumers have been complaining about the rising costs of cable TV and the terrible customer service from cable providers. However the options for cutting the cord were few and far between. But just in the last few months, the options have leapt forward with HBO Now, Sling TV, Sony's PlayStation Vue, CBS All Access, Starz Play, Cinemax MAX Go and Encore Play offering viable alternatives to cable TV; and rumors are that Apple will launch their own streaming subscription service by mid-year. Combined with Netflix, Amazon Prime and Hulu, the options for cord cutters are getting better by the day.

Last December, my wife and I made the decision to cut the cord on cable TV. We were subscribing to Comcast's triple play service for about $190/month. Like most people, I hated how Comcast would raise prices substantially every year and then I had to do the dance of pretending that I wanted to cancel to get them to give me a lower price. Not to mention that their internet service was shoddy and inconsistent. Moving to a new house made the decision easy for us to cut the cord on cable TV. We gladly said sayonara to Comcast. We knew that it would be a transition but if we did,t like it, we could simply add the service later. We signed up for Verizon Fios internet for just $40/month. Our savings translated to $150/month by cutting our land line phone and TV!

Our TV viewing has definitely changed. We added Amazon Fire TV and now watch everything on demand. No more mindless channel surfing. It's neither good nor bad. It is just different. I haven't seen a commercial since the Super Bowl. Recently we have been binging on AMC's the Walking Dead. Yes we are late to the party but we are loving it. We will never go back to traditional cable TV and we're excited to see what Apple and others bring to the TV over the next few months. For those that want local news, a HD antenna will likely do the trick.

I remember the days of Blockbuster Video and how virtually everyone hated the company. The customer experience was terrible. It was a chore to pick a movie and then they would slap you with late fees all the time. No one liked the company but there wasn't much of a choice. Then Netflix came along and customers jumped at the chance to get away from Blockbuster for good. In just a few years, Blockbuster was bankrupt!

This reminds me of people's relationship with the cable TV providers. Last year the University of Michigan's Ross School of Business conducted its American Customer Satisfaction Index and found that Time Warner and Comcast are the most hated companies in America. Time Warner scored a 56/100 which was the lowest score of all time. Comcast was a close second at 57/100. The ACSI said,

High prices, poor reliability, and declining customer service are to blame for low customer satisfaction with pay TV services. The cost of subscription TV has been rising 6% per year on average – four times the rate of inflation.

The exodus is coming

When consumers realize that they can spend less money and have a good viewing experience, there will be a mass exodus away from the hated cable companies. For years, cable providers have argued that unbundling of channels would mean a higher cost and fewer channels. Newsflash: this simply isn't true. First, according to Nielson, while the average US TV home receives 189 channels, consumers tune into just 17! So even if we get rid of 150+ channels, consumers won't even flinch. 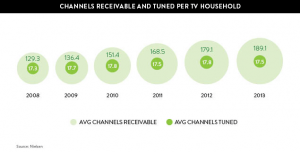 Secondly, the costs are lower especially when you consider that you don't have to sign up for yearly contracts like cable TV. For example, Sling TV will get you ESPN, AMC, Food Network, A&E, History, HGTV, Travel and Disney for $20/month. If you don't like the service or a better option becomes available, you can simply switch to a new service, perhaps Apple TV by mid-year. Millennials and others have cut costs further with the practice of sharing passwords. While this practice in some cases violates service agreements, if not the law, executives are aware of the practice and frankly don't care. HBO CEO Richard Plepler said, “It's not that we're unmindful of it, it just has no impact on the business.” He called it a “terrific marketing vehicle for the next generation of viewers.”

The two biggest winners are consumers and Netflix. Consumers are happy to have an alternative to the monopolistic cable providers. Furthermore, our viewing habits are changing as we watch shows on our phones, tablets, notebooks and TVs. We want to watch content when we want and where we want. If this can be done a lower price and in a convenient way, then it is huge win for consumers. Vizio's CTO says that his company is seeing indications of a tipping point, in which consumers are watching more online services than traditional TV during some weeks.

Netflix is the giant in streaming video and it stands to benefit from the cord cutting trend. Netflix has more than 37 subscribers in the US which makes it larger than HBO domestically. Those subscribers watch an average of 90 minutes of programming per day. Netflix CEO Reed Hastings believes they can reach 60 to 90 million subs in the US. If HBO Now is able to charge $15/month, Netflix has room to increase pricing and profits as its service starts at just $7.99/month.

Have you cut the cord on cable TV? Share your stories and tips with us in the comments below.

“Cutting the Cord – Cord Cutting from Cable TV to Streaming TV Services” by mikemacmarketing is licensed under CC BY 2.0