Yesterday, the Federal Reserve removed its “”patient”” language, as expected, but Fed Chair Janet Yellen delivered her best quote yet:

Just because we removed the word ‘patient' from the statement, doesn't mean we're going to be impatient.

With many investors still expecting a first rate increase in 2015 (perhaps in September), you shouldn't count on it. Why? It's actually quite simple. Yellen repeatedly tells the market that the Fed's decision is data dependent on whether it will raise rates or not. So if you look at the data, there is nothing in the data telling us that a rate increase will come in 2015 at all. Let's look at the numbers.

The Fed targets 2% inflation. In January the CPI printed -0.19%. Yes deflation, not inflation. With oil prices trading at less than half the price as last year, this will keep inflation near zero for at least the first 9 months of 2015. This data point won't pressure the Fed to raise rates until 2016 at the earliest. Unless there is a dramatic reversal in oil, inflation will remain well below the Fed target of 2%. 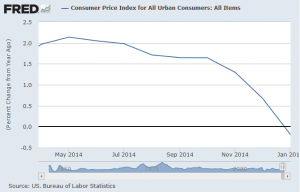 The Fed just reduced its economic growth projection for the next 3 years! Is that a scenario where the Fed would want to raise rates? I don't think so. The Fed reduced its GDP growth projection to a range of 2.3-2.7% in 2015, this is down from 2.6-3% projected in December. For 2016, the Fed projects GDP growth of 2.3-2.7%, down from 2.5-3%. The Federal Reserve Bank of Atlanta's GDP model is forecasting close to no GDP growth in the first quarter of 2015.

With slowing growth expectations in the US, the international markets are even worse. China continues to slow. Japan teeters on recession on a quarterly basis. Europe just launched a massive QE program to fight deflationary pressures. Global slowing plus slowing US growth makes a rate increase highly unlikely.

The conclusion is simple. There is little to no chance that the Fed will raise rates into these two key data points. Don't expect any rate rise in 2015 and watch the data for any chance of an increase in 2016. With expectations still forecasting a rate rise in June/September, this could translate to a heightened period of volatility as the market deals with uncertainty and changes in expectations.