Today the S&P 500 is clinging to positive territory for the year but the technology bubble, especially cloud and social media stocks, is popping. It is very remiscient of the 2000 tech downturn which I am very familiar with. At my first Wall Street job, I was in charge of IPOs and this IPO market is eerily similar.

In our 4th quarter client newsletter, we purposely spent a lot of time on bubble cycles.

They (bubbles) repeat themselves over and over from tulip bulbs to real estate to internet stocks. The pattern is always the same. The price of a financial asset becomes detached from the real value of the economic asset it represents. For example, during the internet bubble in 1998 to 2000, technology stocks skyrocketed, completely detached from the fundamentals of the underlying assets. Many companies had no earnings at all… As we look at the current market, we are beginning to see signs of bubble like valuations in certain names and sectors though the overall market is not a  bubble at this time. In our opinion, some technology stocks are trading at extremely rich multiples. Twitter went public in November and is trading at a staggering price to sales ratio of 66.” 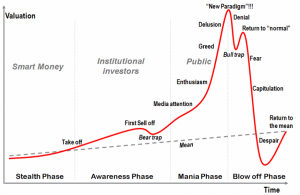 Recently hedge-fund manager David Einhorn warned of a tech bubble. “There is a clear consensus that we are witnessing our second tech bubble in 15 years,” said Mr. Einhorn of Greenlight Capital Inc. “What is uncertain is how much further the bubble can expand, and what might pop it.” He described the current bubble as “an echo of the previous tech bubble, but with fewer large capitalization stocks and much less public enthusiasm.”

A quick look around the market and you can quickly see that tech stocks are starting to get ugly very quickly. I would argue with Einhorn that the bubble is already popping and we are unlikely to see further expansion.

Amazon has defied gravity for many years. CEO Jeff Bezos is famous for trading near term profitability for increases in sales. Amazon is trading at a staggering 120x forward PE! 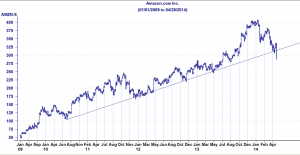 We warned of the Twitter multiple back in January and it made a round trip from $40 to $70 back to $40 since going public. It is still trading at 37x sales! Analysts forecasts earnings of just 2 pennies in 2014.

Cloud stocks have been trading at crazy multiples as well. Workday is one of the biggest offenders. It makes TWTR look cheap because WDAY is losing money every quarter. 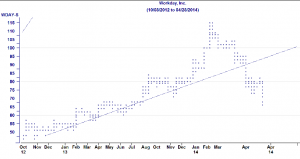 3D printing has also been a big story over the last couple of years. While the company is profitable, it is trading at 60x PE while earnings are expected to be down 6% in 2014. The chart looks ugly.

The IPO market is also showing signs of cracking. Over 80% of companies that went public over the past 3 months weren't profitable and we are starting to see deals with low demand and bad opens. This is a very bad sign. Candy Crush creator King Digital is trading 20% below its IPO price of $22.50 and the Chinese Twitter Weibo (WB) is trading near its IPO price. Weibo priced at the lower end of expectations and sold fewer shares to the market.

All of these are ominous signs for the market especially with the Fed tapering its asset purchase program. Don't ignore the writing on the wall. At the very least take some chips off the table.