The bond bull market is alive and kicking

2013 was a brutal year for bond bulls. After Ben Bernanke mentioned the word taper in May, bond investors rushed for the door. From June to December 2013, bond mutual funds saw staggering outflows of $176.8 billion. Pimco's flagship Total Return Fund posted a 1.9% decline, its first down year since 1999. That fund saw its assets shrink by over $41 billion in 2013. Many proclaimed that the bond bull market was over and left for dead.

But 2014 has been a different story. First quarter GDP was just revised down to -1% from a +0.1%. Slowing US growth has trumped the taper and mutual fund flows have seen a big reversal in 2014. Since January, bond mutual funds have seen inflows of $39.4 billion while US equity funds have seen outflows for the past 4 weeks of $9.5 billion. 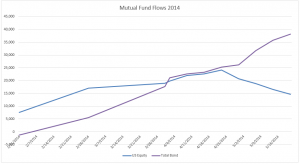 While interest rates are in striking distance of historic lows, you shouldn't expect rates to substantially rise anytime soon. Since stepping down from Chair of the Fed, Ben Bernanke is now earning $250,000 per appearance for hedge fund managers and businessman. In a recent Reuters article, we are left to wonder if rates will stay low for decades much like Japan.

At least one guest left a New York restaurant with the impression Bernanke, 60, does not expect the federal funds rate, the Fed's main benchmark interest rate, to rise back to its long-term average of around 4 percent in Bernanke's lifetime, one source who had spoken to the guest said.

Most Wall Street economists are expecting the Fed to continue the taper and finish by year end. However there is still the chance that the Fed will untaper the taper. In other words, they will soon begin to talk about their next round of QE, quantitative easing.

Stephanie Pomboy, founder of MacroMavens, believes this is exactly the case. She is especially worried that the U.S. doesn't have enough strength for sustainable growth without another boost from the Fed. And, she says, too many investors have a false sense of security about the economic fundamentals. She is bullish on bonds and gold.

And the Fed can't continue to taper Treasury purchases, considering that foreign purchases of Treasuries have collapsed in the past several years. We used to rely on foreign financiers to fund our borrowing, but those days are long gone. They are buying Treasuries at a rate not much above $100 billion a year, down from $800 billion 3½ years ago.

Foreigners are buying about $10 billion a month of Treasuries. This compares with deficit financing needs for the U.S. government of roughly $40 billion a month, based on this year's deficit. So the Fed needs to pick up roughly $30 billion a month in slack. When the Fed slashed its buying to $25 billion, effective this month, it for the first time opened up a demand deficit for Treasuries. If they continue to taper, that gap will expand, and things could get bumpy in the Treasury market. Rates won't go up five basis points before the Fed would start talking about more QE.

Are you bullish or bearish on Bonds? Leave your thoughts in the comments section.