Will S&P earnings drive the market to new heights?

Runnymede made one of the earliest calls on the corporate earnings recession in February of 2015. S&P earnings have been flat out terrible for 5 of the last 6 quarters with double-digit declines. However last quarter, the S&P showed signs of turning the corner. Analysts had forecast 10% growth heading into the first quarter but companies still fell well short of that mark for essentially a flat quarter. As 2nd quarter earnings season kicks off, analysts are even more bullish with S&P reported earnings growth forecast at 15%. While we do not expect this number to be that great, if it can even show high single digit growth, it could very well prove to be a catalyst for stocks to hit new highs. 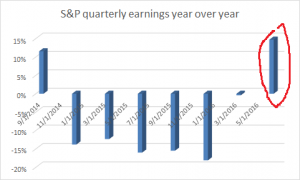 Analysts are likely still too optimistic on oil. Even though prices have rebounded from the February lows, the comparisons will be tough from 2015. In June/July 2015, oil prices averaged $60; however this year prices were closer to $45. Third and fourth quarter comps should be much easier to beat and should finally show growth out of the energy sector as long as prices hold stable at current levels.

US Dollar no longer a headwind

Last year, the strong US Dollar proved to be a very tough headwind for earnings. This affected the multi-national corporations greatly. This will be the first quarter where the US Dollar will no longer be a factor since the Dollar has traded sideways since last year. 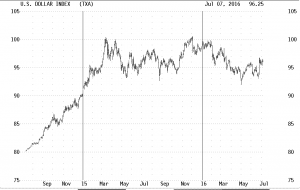 Are you bullish or bearish going into the second half of 2016? Please leave a comment below.