In 2007, Nassim Taleb published his best-selling book “”The Black Swan: The Impact of the Highly Improbable.”” Taleb contends that banks and trading firms are very vulnerable to hazardous Black Swan events and are exposed to losses beyond those that are predicted by their defective financial models. This proved to be right on the mark as one year later, the financial system almost collapsed due to poor financial models that predicted real estate prices would go up forever.

In our last quarterly letter to clients, we shared our view on the next potential black swan. While many media pundits like to pontificate on the Chinese banking system, we instead pointed to the countries with negative interest rates as the real and present danger.

We are becoming increasingly worried that European and Japanese banks could trigger a potential crisis. In 2008, it was the US banks that almost brought down the entire financial system due to their high leverage and subprime loans. Today the major banks like Deutsche Bank, Royal Bank of Scotland, Credit Suisse, Mitsubishi Financial, Nomura, and Sumitomo Mistui are all trading near their 2008/9 lows. Deutsche Bank reported a staggering loss of $7.3 billion in 2015 and it is expected to struggle with writedowns, litigation charges, and restructuring costs for at least the next 2 years. A strong banking sector is essential for economic growth and in two of the largest economies, the banks are in terrible health.

The surprising Brexit vote has only increased the stress on European banks. The British banks have been hit hardest by the news. Barclays (ticker BCS) cratered from 11.18 on Thursday June 23rd to as low as 6.76 Monday morning. Legendary investor Jim Rogers believes the “leave” movement’s victory last week may threaten the British union and its influence as the financial center of Europe. While any negotiated deal may help assuage the market’s Brexit fears, Rogers foresees a “bad case scenario” where Scotland and Northern Ireland leave the UK and London’s clout diminishes significantly as financial institutions move towards continental Europe.

But the damage hasn't been limited to the UK banks. Credit Suisse Group (CS) hit a low of 10.56 which is lower than its 2002 and 2009 lows. Deutsche Bank is also trading at historic lows. 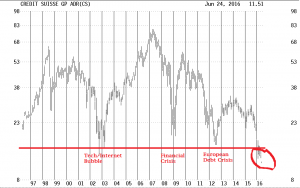 Risk of contagion and counterparty risk is becoming increasingly worrisome. We can remember back to 2008 when Bear Stearns and Lehman Brothers held conference calls with investors about their financial stability and then declaring bankruptcy the next day. Last month we wrote about the risk of the huge derivatives market. It is estimated that Deutsche Bank has a derivatives book of over 55 trillion Euro, which is almost 20x the size of Germany's GDP and roughly 5x the GDP of the entire Eurozone!

On the positive side, the world's leading central bankers finished a weekend of brainstorming in Switzerland as what their next move might be. They had already planned to convene at the annual meeting of the Bank for International Settlements. At a minimum, they will stand ready to take the necessary actions to ensure orderly market functioning. The Bank of England moved swiftly to provide $460 billion in liquidity after the Brexit outcome. Expect the central banks to intervene if signs of stress increase in the coming days.

“Black swan with offspring on the water” by Tambako the Jaguar is licensed under CC BY-ND 2.0