My early days on Wall Street

I graduated college in May of 1997 and hit the ground running when I landed on Wall Street as a research analyst. Just a year later, Long Term Capital almost crashed the global markets but the Fed stepped in and then the fun began as the Internet bubble inflated to hysteria. Taxi drivers and barbers would tell stories of how they made thousands on eBay or Yahoo, but all bubbles end in a bust. By then I was working as an assistant portfolio manager to a multi-billion dollar fund.

As the nasty days of the fall of 2000 battered tech stocks, my bosses were increasingly stressed as we had no way of protecting against the downside as our stated mandate like most Wall Street firms was to be fully invested. Sure we could carry 1-2% but that's like carrying an umbrella in a hurricane. The Nasdaq would fall close to 80% in two long years and it took such a toll on my bosses that they decided to retire from the industry rather than deal with the daily stresses of the market. I would also take time off to reflect on the boom and bust cycle and I went searching for a better solution than staying fully invested in markets that declined over 50%.

Searching for a better way

Lucky for me, I didn't have to look far for the solution as my father Samson was famous for protecting his clients before the Black Monday Crash of 1987. In 1996, he coined the term financial hurricane as he wrote an depth article on the benefits of a defensive strategy in down markets. He always stayed one step ahead of the market and he protected his clients again in 2000. His years of studying thousands of economic variables provided him with a clear roadmap of the future and the ability to take decisive action before the market crashed. His methodology proved effective again in 2008 as we safeguarded client assets and this time I didn't suffer the stress like I did in my early Wall Street days.

Many industry insiders scoff at the term market timing but so do I. No one can capture every daily wiggle in the market but I see a huge benefit of protecting a portion of assets before a bear market hits. This prudent bear market strategy not only relieves stress during the height of the financial hurricane but more importantly it enhances long term returns. 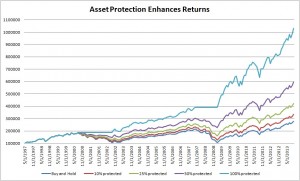 While I don't expect anyone to sell everything in the face of a financial hurricane, the results are incredibly clear. Just a small amount of protection, even 10% of assets, will mean more in your pocket later. Be sure to have a prudent bear market strategy before the next financial hurricane hits.

“Strategy” by Got Credit is licensed under CC BY 2.0

Did you take protective measures in 2000 and 2008? Will you the next time around? Please share your comments below.