The most challenging factors which we spend time thinking about and analyzing are “”Black Swan”” events. These rare and unpredictable events cause severe damage because of psychological biases that make people individually and collectively blind. One potential black swan in our sights is the US shale oil bubble bursting. This has appeared on our radar screens because of the crude oil crash over the last half year which has seen prices of crude oil fall from $107/barrel to just $46/barrel today. Needless to say, this is a large deviation which has laid witness to a 57% decline in the price of oil. So what are the possible implications for the US economy and the stock market? 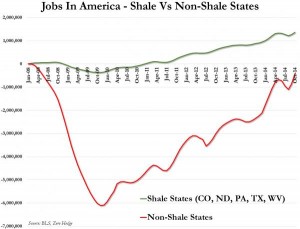 The first risk is that a huge number of jobs may fall by the wayside. The US shale boom made the US the largest producer of oil in the world in 2014. However with prices now below breakeven in many projects, rigs are already being shut down and jobs losses are mounting quickly. As you can see in the chart above, the 5 shale states added 1.36 million jobs since December 2007 vs the non-shale states which lost 424,000 jobs. The ripple effect of lost jobs in this booming sector could be a severe drag going forward, not just for the energy sector, but for housing, restaurants, and services in these shale states.

Our industry is clearly in the early stages of a down cycle, the same sort of cycle we enter once or twice a decade.

Subprime triggered the domino effect in 2007 and it could be shale junk bonds that trigger the domino effect in 2015. How do these two mimic each other? The subprime crash was caused because investors didn't properly account for risk of the underlying assets of collateralized debt obligations (CDOs). Furthermore, their prime rating was based on the assumption that real estate prices would go up steadily in perpetuity. The shale boom has similar characteristics as it is funded by investors hunger for yield in a low rate environment and it is reliant on oil prices staying high forever. Well surprise surprise. Real estate prices can go down and crude prices have crashed. Now the shockwaves will make their way through the financial markets.

According to Thomson Reuters in 2014, lending to oil and gas companies totaled over $465 billion, the highest annual total ever. Within the broad junk market, energy accounts for some 16%, a fourfold increase over the past decade. In the first week of January, the first casualty was a private company, WBH Energy, which filed for bankruptcy protection saying a lender refused to advance more money. One industry analyst warned, “There are too many ugly balance sheets… the group is not positioned for this downturn.”

The S&P 500 has an 8.3% weighting in the energy sector which is now in bearish territory having plummeted by over 25% since July. The good news is that the remaining eight S&P sectors remain in bullish formation. The crude oil crash could pull the US into recession and we will be keeping a keen watch on our economic indicators for any signs of weakening or job losses out of the shale states. This is very critical situation to watch in 2015.

“Black swan with offspring on the water” by Tambako the Jaguar is licensed under CC BY-ND 2.0