Experts Concerned About Debt Yet Remain Very Bullish on China

With our world getting smaller daily, it is imperative to keep one's eyes and ears open to what's happening in global economies, especially the world's second largest economy. On May 24th, I attended the 2017 Peking University Guanghua New York Forum at the New York Public Library.  The forum featured renowned speakers re-imagining China’s business landscape for an audience of 200 Chinese and international industry leaders, academics, and innovators to discuss, debate, and exchange ideas.  Here are the highlights.

Carolyn Brehm, VP for Global Government Relations and Public Policy at Proctor & Gamble, said, “China has transformed and is presenting market opportunities we never could have dreamed of 4 years ago.  Nothing compares to the China opportunity.”

For perspective, she put up this slide:

She went on to elaborate that the affluent Chinese consumer has changed dramatically in the past decade.

Today's consumer in China is:

Patricia Graue, a Director at the Brunswick Group corroborated the above themes.  She spoke about China's expectation for dramatic change across many sectors and that American companies' business success in China will depend on connecting with upper middle class consumers' changing expectations.

She cited this McKinsey forecast for massive growth in upper middle class households. 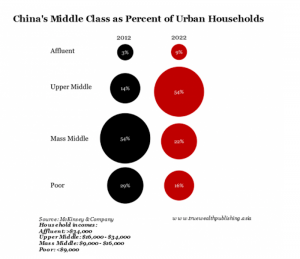 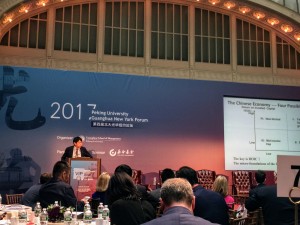 Joseph Lake, Director of Global Forecasting at The Economist, on Sino-US political leadership:

“Everyone looks at China's debt issue.  I think it is a serious problem, and the Chinese government recognizes it.  Outsiders tend to be overly concerned because they underestimate China's ability to deal with these types of issues.”

… on the Asian Financial Crisis and Subprime:

“Balance sheets looked dangerous but in the end the Chinese government was able to solve it.  Unlike the USA and other developed market economies, China's government has resources and assets (much larger) compared to Western governments.  As long as government understands the reality, resources and the tool box should enable China to deal with issues.”

On potential areas of future growth:

“Stability is a top priority.  China's central government is reigning in.  The government believes leverage is too high so their reigning in liquidity.  Financial markets are a big part of the reform.  China opened up its interbank bond market.  Foreign investors invest $123 B which only accounts for 1.3%, third largest behind U.S.A. and Japan.”

“You will never see a billion people enter the middle class again.  As incomes rise and change, the complexity is exploding… it is impossible to make definitive comments about the consumer.”

Are your views on China generally positive or negative?  Do you see China as an economic partner or dangerous competitor looking into the future?

“Chinese New Year London” by Paolo Camera is licensed under CC BY 2.0