Last October, I realized that I may be hitting the age where I have to be more thoughtful about my eating habits. My pants were getting tighter by the day and the scale showed me a number that was the highest I had ever seen. That was my wake up call. I certainly didn't want to have to buy new pants that actually fit correctly. Immediately I started to eat less carbs and more veggies. Then in January, my friend Amy Crowson of Lovebugfitness was having a clean eating challenge. It was a great way to take my clean eating to another level and have the support of other people on the same journey – check our her 10 day challenge (use the coupon code ONLY10 and pay just $10) if you are looking to kick off the healthy lifestyle that you deserve.

While it is easy to eat well at home, I have always found it to be more difficult when eating out. Even in NYC where there are so many restaurants, if you want a healthy option, then you are often limited to uninspired salads from a deli and don't make the mistake of putting salad dressing on a McDonald's salad which makes it worse than a double Big Mac. No joke.

This led me to the discovery of Eatsa. When you walk by, you are immediately wondering what the place actually is. There are no cashiers and no visible employees. It is something I would expect from a modern Japanese quick serve even though I have never been to Japan. I was happy to discover that it is a vegetarian fast casual eatery.

In town for meetings, I recently had the opportunity to stop in at Eatsa for lunch. First you walk up to tablets sitting in kiosks along the wall. Cash is not accepted here as you have to swipe your plastic to get the process started. With that swipe, Eatsa already knows you name and you are ready to choose your healthy food. You can customize your quinoa bowl with prices starting at $6.95 which is incredibly inexpensive for any food in NYC or in the suburbs for that matter. Once you order, you wait for your name to appear digitally at the top of a wall of illuminated cubby holes. When your name appears, you tap on the respective window and your food/drink are waiting. There is limited seating in the restaurant with about 3 chairs to sit at. If you want to dine in, you can have a standing lunch using the counter space than runs alongside the large windows.

The best part is the food is good!

Most of the articles that you read focus on the cool ordering process and the fact that there is no human interaction. Sure there are people making your food behind the walls, but the tech enabled experience is what all the buzz is about. While that is certainly cool, any restaurant concept without good food won't survive for long, but I'm happy to report that the food was actually really good. I ordered a falafel hummus bowl and I have since copied that recipe multiple times at home because it was so good. Don't get mad at me Eatsa, I live in NJ so I can't partake in the real thing very often. 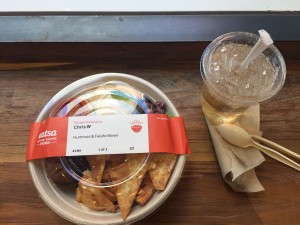 Eatsa was started in 2015 in San Francisco and now has 2 locations in SF, 2 in NYC, 2 in DC and 1 in Berkeley. One of Eatsa's founders Dave Friedberg says that while the robotic system may sound contrived and gimmicky, it is a means to support a bigger mission: selling nutritious and sustainable food at a reasonable price.

According to a Fortune article, automatic ordering cuts down on Eatsa's labor and real estate costs and helps push through some 600-700 orders an hour. Friedberg says that formula is the reason he can charge about 30-40% less than a meal than fast-casual rival Chipotle. This is clearly the trend in fast food as McDonalds and Panera have already been moving toward automation as well.

Eatsa doesn't lead its messaging with labels like organic or vegetarian because it doesn't want to alienate any carnivores and actually hopes to kind of trick them into giving it a try. Friedberg says that 80% of customers who were unfamiliar with Eatsa's products didn't realize they were vegetarian after they ate them. While I knew what to expect going into my Eatsa experience, I can attest to the fact that the food was tasty and was filling as well.

I'm hoping that this healthy quick serve concept thrives and spreads like a virus across America. If you are near an Eatsa, I highly recommend giving it a try. Let me know what you think.