Investors aren’t bullish enough on US stocks for 2018

Over the last few days, I've been listening to Wall Street firms talk about their expectations for the year ahead. Almost all of them have a positive view but it is the same standard presentation over and over. Most of them conclude that they prefer international stocks over US stocks because of valuation. While Europe is certainly trading at a lower multiple than the US, their growth is also expected to slow in 2018. Also note that European markets significantly underperformed US markets in the 2nd half of last year.

For Runnymede, we are certainly intrigued by the long-term opportunities in emerging markets because they have better fundamentals and lower valuations. In terms of the developed markets, we believe that investors aren't bullish enough on US markets. As I wrote a couple of weeks ago, Wall Street strategists have a target of 2848 for the S&P which I believe will be too conservative especially if interest rates stay low. Here are a couple of reasons why investors aren't bullish enough.

Note: We will be hosting our quarterly investment outlook webinar on Tuesday the 9th at 2:30 for our clients. We will discuss the markets and take Q&A. If you have interest in tuning in live or to the replay, email us at firm@runnymede.com.

In the summer of 2016, we turned bullish on US stocks because corporate profits shifted from negative to positive growth. This proved to be a great call. In 2017, S&P reported earnings grew by 18% and the S&P had a great year appreciating over 21%. This is no coincidence as stock prices typically follow earnings over time.

Interestingly, the street is expecting another year of strong earnings growth of 16% operating earnings growth in the year ahead. That would be great but I think this number is likely too conservative. On September 7th, street estimates were for S&P earnings of $144.88; and at year end, estimates improved to just $145.36. Of course we know that there was a significant event in this time as tax reform was passed to cut corporate taxes. It is clear to me that Wall Street analysts haven't factored in tax reform into their estimates so revisions should move higher and could come in significantly higher.

US corporations are set to get a boost from a tax cut from 35% to 21%. For many multinationals, they aren't paying anywhere close to 35% so it won't be this drastic a cut for many S&P 500 constituents. But the new tax bill also sets a one-time mandatory tax of 8 percent on illiquid assets and 15.5 percent on cash and cash equivalents for about $2.6 trillion in U.S. business profits now held overseas. Some of this money will come back onshore and combined with the tax cut, US corporations are set to be flush with cash. The question is: what will they do with this boost to their cash flow? 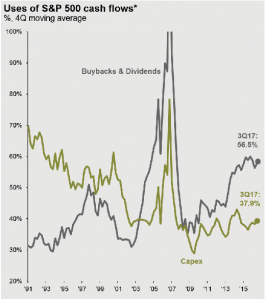 As you can see from the chart above, corporations have been increasingly using cash flow by returning it to shareholders via share buybacks and dividends. There has been little increase in capex spending. With the boost in net income and cash moving onshore, this should further boost earnings in 2018. Could we see 25%+ earnings growth? We very well could given this backdrop.

These are a couple of reasons to favor US stocks over international stocks which aren't getting an additional tax boost to their earnings. This could be another big year for the US stock market!