The Federal Reserve Bank of New York this month began publishing the Business Leaders Survey covering service firms in New York, northern New Jersey, and southwestern Connecticut. The new survey makes sense for a region of the U.S. that is more closely connected to finance, tourism, and media than it is to manufacturing.

New York, in particular, represents a high concentration in advanced service sector firms in fields such as law, accountancy, banking, and management consultancy. The new monthly release will provide insight into the regional service sector and compliments the Empire State Manufacturing Survey, published since April 2002.

Here is a summary from the Federal Reserve Bank of New York:

Business activity strengthened in the region’s service sector, according to the January survey. The business activity index was 6.2, indicating a modest increase in activity over the month, even though it was slightly lower than its December level. The index has been positive since April, suggesting that business activity has been growing for the past several months, with the January level at about the average seen over the past ten months. The business climate index remained negative at -8.0. This index is derived from a survey question that asks respondents to rate the business climate for this time of the year as better or worse than normal. This month, 21 percent of respondents said that the business climate was better than normal, while 29 percent said that the climate was worse. Although this index has been negative since 2007, it has been on a clear upward trend since the end of the national recession, with this value representing its highest reading since August 2007. 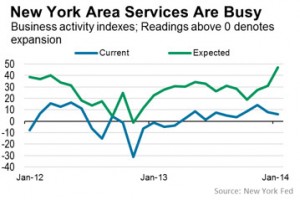 According to the recent poll of about 100 service companies, including retailers and technology firms, 40 percent of respondents expected to boost their payrolls this year, up from 28 percent in 2013. Further, service sector executives were upbeat about the future with the business climate index for the next six months at 37 points, the highest since April 2010. Although just recently published, the survey has been conducted since 2004 so there is nearly a decade of historical data to gauge how well some of the survey’s indicators have performed.

Have you looked at your investment portfolio to see what percentage of your holdings are in the service sector versus manufacturing, agriculture, or mining?