Both commodities and stock markets are considered leading indicators in economic analysis and forecasting. In 2014, the prices of industrial commodities including copper, oil, gas, steel and coal declined sharply. On a currency adjusted basis, the stock markets of Germany, Japan, Brazil, Australia, United Kingdom, Russia and Austria also fell. In the United States, the Dow Jones Industrial Average started the year at 16,576, down 2.8% to 15,935 as of October 16th while the Russell 2000 small cap declined 6.6% and S&P was flat in the same time period. The markets were signaling a possible economic slowdown in the G7 countries.

In late October, an exogenous element appeared. In an effort to seek higher returns, Japan's $1.1 trillion Government Pension Investment Fund announced its decision to more than double its international equity holdings to 25% from 12%. Japan bought stocks aggressively in November and December contributing importantly as a catalyst driving major US stock averages to new highs. 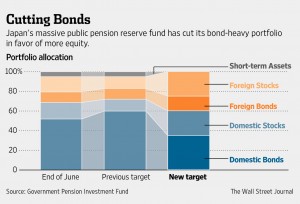 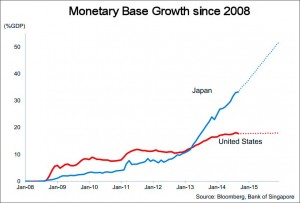 Reflecting back to 1989, you may recall that Japan's Bubble Economy peaked. Japanese investors bid up prices by buying Rockefeller Center, Hawaiian golf courses/hotels, and French art at the top of the market. Given their poor track record, we get nervous when Japan is aggresive.

Should one join the party? While this time may be different, it is important to note that the Japanese equity buying will be nonrecurring. Further, the action appears more based on politics rather than economics. Is their buying completed? Will it continue? Can the  market hold up without their support? Certainly, the action of the US and worldwide stock markets in 2015 has already been very interesting and not for the faint of heart. We will watch the developments as the quarter unfolds.

We at Runnymede Capital will always study and research an exogenous variable with great care and diligence. We will react conservatively if it’s not based on economics.