The Fed Shows Their Next Recession Plan: Negative Interest Rates

While many economists have been (incorrectly) predicting a September rate hike from the Fed, Runnymede has been saying that the Fed won't hike rates since the beginning of the year and with recession on the horizon believe that there may be no rate hike in 2016 either.

With growth slowing around the world and inflation at zero, the Fed is unlikely to move rates off the zero level. In any case, the most surprising news from the September FOMC meeting is that one member predicted negative rates in 2015 and 2016! Yes you read that correctly. While the majority of the Fed is still predicting (poorly) a rate hike in 2015, there is one member that wants to go to negative rates. In Europe, the Swiss, Swedish and Danish central banks already have negative rates to stave off the risk of deflation. 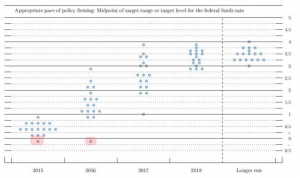 What did Fed Chairman Janet Yellen have to say about the negative rate scenario?

Let me be clear that negative rates was not something that we considered very seriously at all today.

The key word in that sentence is today. Since Yellen has been hinting at a hike, it is unsurprising that they aren't considering this today.

I don't expect that we're going to be in a path of providing additional accommodation. But if the outlook were to change in a way that most of my colleagues and I do not expect, and we found ourselves with a weak economy that needed additional stimulus, we would look at all of our available tools. And that would be something that we would evaluate in that kind of context.

So there you have it. When the next recession comes around (likely 2016), the Fed will be choosing between QE4 (quantitative easing) and/or negative interest rates.

Dalio: Fed's next big move will be to ease, not tighten

Ray Dalio, the founder of the world' largest hedge fund Bridgewater Associates, said the firm believes the next big move by the Fed will be to loosen US monetary policy, not tighten it. He warns of global deflation, slow global economic growth and the lingering risk aversion that is behind the proclivity to hold cash. He said that the Fed will react “to what happens,” suggesting it should undertake more QE.

Societe Generale's Albert Edwards believes that the Fed should lower its benchmark rate below zero during the next downturn. In a note to clients, he wrote:

The next US recession will probably arrive a lot sooner than most investors expect and will likely see more desperate monetary experimentation from the Fed. Bob [Janjuah of Nomura] and I thought that this time we would see deeply negative interest rates in the US (and Europe). Sweden has led the way, dipping their toe below the water line with their current -0.35% policy rates but there will be more, much more along these lines. For if -0.35% is possible, why not – 3.5% or less? It goes without saying that deeply negative interest rates would be accompanied by a massively expanded QE4 in the US. The last seven years of exploding central bank balance sheets will seem like Bundesbank monetary austerity compared to what is to come.

We recently wrote about the weakening US economy in “They Say Recovery, We Say Recession.” With this in mind, we wouldn't be surprised to see talk of monetary easing by the Fed to start gaining traction by the end of the year.