They Say Recovery, We Say Recession

How is the economy doing currently? Not well. The United States has had two recessions in the 21st century, in 2001 and 2008/9. Our prognosis is that the US economy is losing steam quickly and the third recession is getting near. Let’s look at the cost of money, raw material and labor. Due to a lack of demand, all current indications are that interest rates, commodity prices and real wages will continue to fall.

What is the cause of the problem? The zero interest rate policy (ZIRP) is a major factor in that it penalizes savers who cannot earn a risk-free return on their deposits – in essence a heavy tax burden on all citizens and institutions. The longer this policy persists, the longer the nation’s economic growth will be subpar and possibly worsen. Additionally, the US’s trade policy seems to distance the US from the BRIC countries, the growth engine of the world’s economy over the past decade. Since BRICs account for half of the world’s population, it is difficult to understand the rationale behind a trade policy that discourages doing business with a major part of the world. This is a negative for the BRICs as well as the US.

Orders for consumer products as illustrated below are declining. Since economists are usually late officially announcing the recession, we are sounding the alarm and anticipate negative surprises from the energy and commodity related industries. We believe the recent decline in stocks could be a harbinger of the coming recession and remain concerned that risks could be compounded if the Fed has run out of options to stimulate. 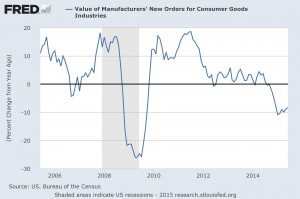 Do you believe that we are are headed for recovery or recession? Please share your thoughts in the comments.

“3D Recession Recovery” by ccPixs.com is licensed under CC BY 2.0