The Global Bear Market has Reached US Soil

You are probably aware that the US markets are off to their worst start in recorded history. However, many media commentators are bear market deniers and believe that there isn't a bear market at all. Stocks will go up forever. If there is a correction, deniers believe that the Fed will just restart its quantitative easing programs, and stocks will continue their ascent to infinity.

I'm sorry to tell you that if you look at the data, the global financial markets are already in a deep bear market, and the world central banks have been ineffective in printing their economies out of recession. Today, I believe that the US is being pulled down by international forces beyond our control. Therefore, the US economy is likely headed for recession in 2016. Let's take a quick look around the world to see the carnage.

First there are commodities which have been in a massive bear market since 2011. The oil collapse just pushed it down further as the CRB commodity index is down over 50% since 2011 and showing no signs of picking up. 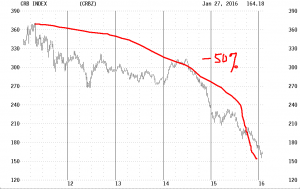 Next we move to the international markets. First up is our favorite brother, the United Kingdom, which topped out in the spring of 2015. 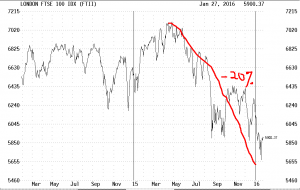 Next we move to the biggest country in the Euro zone, Germany. 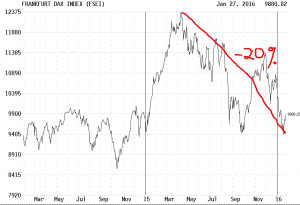 The European markets have declined 20%+ since the start of the European Central Bank's latest round of quantitative easing that is printing over 60 billion Euros per month. This is not a good sign.

Next we move to the Far East. China is down over 40% and even the Kamikaze Japanese are off over 20%. Japan, the world's third largest economy, continues to struggle despite the Bank of Japan buying over 80 trillion yen in assets (including stocks) per year. 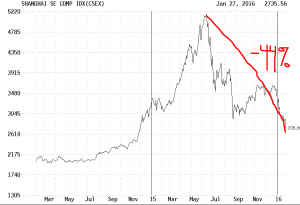 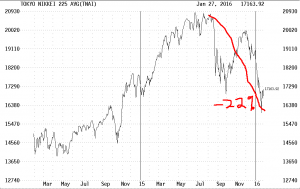 US being held up by mega-caps

The US major market indices like the S&P 500 and Dow Jones Industrial Average aren't in bear market territory yet because they are being held up by the defensive shift into megacap names like Google, General Electric, Amazon and Facebook. If you look under the hood of the US markets, the small caps are well into bear market territory and midcaps are close behind. 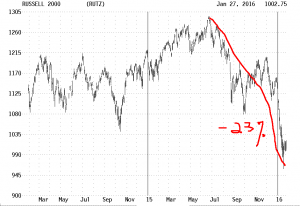 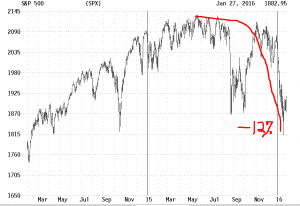 The S&P 500 is trying to stay out of bear market territory, but it seems inevitable that it can remain immune from the downdraft of the global financial markets. If the S&P falls 20% from its all-time highs, it would fall to 1700. That is at a minimum.

Allianz Chief Economic Adviser Mohamed El-Erian recently warned that central banks are out of ammo and growth remains slow. He said, “We have fewer, if any, spare tires. And the road is getting really bumpy. I'm not sure I want to be in that car.” He advised investors to hold 20-25 percent in cash. “You need the optionality of that cash gives you.”