The Winners and Losers of Falling Oil Prices

Since June, oil has been on a sharp decline from $107/barrel to $67/barrel. Thanks to slowing global growth and OPECs reluctance to cut supply, oil prices have fallen to their lowest levels since 2009. As a consumer it is wonderful to see gas prices around $2.50 again. It's been a long time coming. You often read that consumer stocks are the big beneficiaries of falling oil prices but is this truly the case? Let's take a quick look at the potential winners and losers of falling oil prices…

The two biggest net importers of oil are the US and China. China is the 2nd largest net importer of oil and benefits greatly from falling oil prices. In a recent Economist article, based on 2013 figures, every $1 drop in oil saves China an annual $2.1 billion. Therefore, if recent prices can hold at these levels, China's import bill drops by roughly $80 billion. As long as export prices don't fall in tandem, Chinese wealth and standard of living should rise. The impact on the US isn't as clear cut. While the US is the world's largest consumer of oil, it is also now the largest producer of oil as well. On balance cheaper oil will help, but not as much as it has it the past.

Cheaper oil likely means that central banks will remain highly accommodative. With inflation below target levels, the central banks aren't likely to tighten and are more likely to step on the gas with asset purchases. While expectations are for Janet Yellen to raise rates in 2015, she could decide to keep zero interest rates for longer with the sharp decline in commodity prices.

Strategic International Securities Research studied the effects of changing prices of retail regular gasoline and 71 of the primary GICs industry subsectors. They used weekly data from 2000-2014. Here are the correlations: 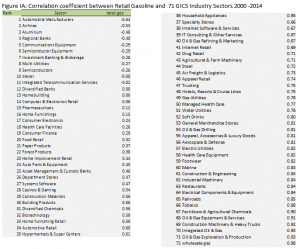 According to the study, the biggest winners of falling gas prices are the Autos, Airlines, Aluminum and Regional Banks. Unfortunately there is no longer a pure play airline ETF, but the S&P Transport ETF (XTN) is 26% invested in airlines. Since October 13th, XTN is up 28% and airline stocks are up sharply: Southwest (LUV) is up 45%, Delta (DAL) is up 50%, and Jetblue (JBLU) is up over 55%.

Surprisingly, restaurants, footwear, soft drinks and apparel retailers have extremely high correlations of greater than 0.74 with retail gasoline. This flies in the face of popular commentary that you'll likely hear on CNBC. So don't run out and buy retail stocks just because of falling oil prices.

Thanks to the Fed's zero interest rate policy, many investors have been forced to chase yield. This has led many to buy junk bonds and MLPs which offer attractive yields. Unfortunately these two areas are at high risk if energy prices continue to fall.

According to a recent Wall Street Journal article, junk bonds are at huge risk because junk bonds have financed the US shale boom. According to Tarek Hamid, a high-yield energy analyst at JP Morgan, up to 40% of all energy junk bonds could default if oil prices fall below $65 per barrel and stay there for the next three years. Energy companies account for nearly 18% of all outstanding high-yield bonds, up from 9% in 2009.

Master limited partnerships have become popular amongst income investors. However MLPs with exposure to oil-and-gas price volatility may surprise many investors with their risk profiles. According to RBC Capital Markets analyst John Ragozzino, “the names most highly levered to a sustained drop in crude oil prices… are MidCon Energy Partners (MCEP), LRR Energy (LRE), and Legacy Reserves (LGCY).” Individual investors should do their due diligence before buying MLPs which carry varying risk profiles.

Since prices are lower at the pump compared to a year ago, how will you be spending your extra cash? Will you be buying goods/services, using it to pay down debt, or banking the savings?