What if we are all stuck at home for the next three months?

This week began my family's social distancing, work from home (#WFH), homeschooling experiment. If you're not already doing the same, odds are that you will be soon. Having completed the prerequisite reading (Social Distancing: This is Not a Snow Day,) my wife and I politely turned down invitations for play dates and get-togethers. We remain focused on doing our part toward flattening the curve. This means having three kids (four if you count me) at home with limited contact to the outside world. It's an adjustment for everyone. Whenever the kids start clashing, usually by late afternoon, we take a family walk around the block. On just day five, we find ourselves walking a lot!

What If This Takes Longer Than We Think?

Experts at The World Health Organization (WHO) tell us that things will get worse before they get better. Looking at Asia, quarantines and school closures have been effective so we are doing the right thing. There is no way to know how long this new reality that we are living in might last, but I think it's important to consider the possibilities.

In a press briefing on Monday, President Trump said of the White House task force, “They think August, it could be July… could be longer than that.”1

Most California schools will likely remain closed for the rest of the school year according to Governor Gavin Newsom. “I would plan and assume it is unlikely that many of these schools, few if any, will open before the summer break,” he said in a news conference.2

Bill Gates was asked in a Q&A Wednesday, “How long could this last?” His answer: “This will vary a lot by country. China is seeing very few cases now because their testing and “shut down” was very effective. If a country does a good job with testing and “shut down” then within 6-10 weeks they should see very few cases and be able to open back up.”3

As I've told our kids, we've never lived through a pandemic like this so we are figuring this out as we go. Teachers are jumping on Zoom and Google Hangouts. Parents are learning how to homeschool. According to the Economist, almost a billion children have seen their schools close because of coronavirus. Let that sink in for a moment.

One of the biggest challenges right now is that we have no visibility. If I had a crystal ball, here's what I'd like to know.

If you have insights or answers, please let me know. Here's what I've been thinking, and why I am wondering how long we'll be confined at home.

Do You Believe China?

Many people have asked me if I believe the data coming out of China and if the Chinese have actually contained the virus. If you don't believe the China numbers, I'd like to point you to look at other Asian countries like Japan, South Korea, Singapore, and Taiwan. These countries have demonstrated an ability to stem the spread of new cases to very small numbers. In fact, their biggest risk right now is new cases coming into their countries from inbound visitors. Notably, Taiwan has barred entry of foreign nationals for this very reason.

I had previously hoped that the United States could get ahead of the virus by seeing what has worked in the above named countries and preparing accordingly. Unfortunately, the number of cases in most Western countries are increasing at a similar trajectory, about 33% per day. The chances that Italy's challenges will be repeated here and other places are very real.

By some estimates, cases in the US are doubling every two days. Total confirmed cases worldwide have exceeded 245,000. 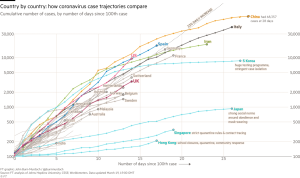 Since we've only just begun, we won't see the effects of social distancing and “shelter in place” for another 10 to 14 days. Meanwhile, we can look to Italy, a country that's about a week ahead of America's virus timeline, and the data is not very encouraging.

Fighting an invisible enemy like coronavirus is not simple and linear. Yesterday, Italy reported 475 new deaths from Covid-19, the highest one-day death toll of any country.4 Referencing the chart below, it was looking like Italian coronavirus infections had started to slow but the recent 4,000+ increase indicates that it's complicated.

Italy's national quarantine, restricting the movement of the population except for necessity, work, and health circumstances, was announced on March 9th and enforced by March 12th. Infectious disease and big data experts at the University of Genoa estimate the new cases will peak in Italy between March 23rd and March 25th.

Based on current data, quarantines may need to be extended throughout the Western countries. 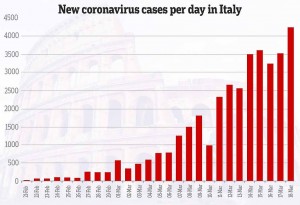 Lest you think that coronavirus is just a flu, I ask you to please watch this Sky News broadcast from the Papa Giovanni XXIII hospital in Bergamo — Italy's worst-hit city.

The Importance of Testing

As World Health Organization Director General Dr. Tedros Adhanom Ghebreyesus said at a March 16th press conference, “You cannot fight a fire blindfolded. And we cannot stop this pandemic if we don’t know who is infected.” In addition to hand washing, social distancing, and travel restrictions, the backbone of successful responses has been widespread testing, isolation, and contact tracing.

A large factor in South Korea's success in containing the virus is attributed to its widespread testing. They can test up to 20,000 people a day at 633 testing sites. Nearly one out of every 200 of its 51 million citizens have been tested.5

In the Northern Italian town of Vò, all 3,300 inhabitants of the town were tested, including asymptomatic people, resulting in containment of the outbreak.6 Researchers found that it's important to identify and isolate infected people as soon as possible, especially those who are asymptomatic. Otherwise, asymptomatics would have unknowingly infected more people.

In the United States, most hospitals and physicians do not have enough tests. In turn, healthcare professionals initially limited testing to those who had traveled from China, Italy, or Iran.

This is beginning to improve; but even today, a friend of ours went to the ER in Manhattan to be tested only to be told that testing wouldn't be administered. If you have symptoms, it is assumed that you have the virus and your prescribed course of treatment is to self-quarantine for 14 days. Come back or call 911 if your condition worsens.

In South Dakota, Governor Kristi Noem said a public health lab had to halt coronavirus testing due to a shortage of supplies.7

Given the limited testing in the USA, it is likely that the actual number of Covid-19 cases here is higher than the confirmed cases currently reported. Again, this lack of visibility is concerning. It could also indicate that containment in the United States may take longer than initially estimated. 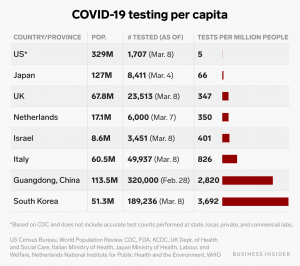 If we're at home for months, not weeks, this could have an unprecedented impact on our economy and financial markets. Businesses are already talking about global supply chain disruptions. The deeper we think about this, the more we start to see this health crisis as an economic one too.

This is different from the financial crisis of 2008 when bailouts and helicopter money could rescue the global financial system from the brink. Today's pandemic poses risks to multinational corporations and small businesses alike.

Tweeted by Derek Thompson, a writer at The Atlantic, “Online restaurant bookings declined to zero in New York, Los Angeles, San Francisco, Seattle, DC, Boston, and Toronto.” Think about your favorite restaurant within two miles of your home, you know, the one you frequent regularly. How long can the owner, who you know by first name, stay in business?

There are over 30 million small businesses that employ 59.9 million people, or 47% of the total workforce in the U.S.8 The negative impact of everyone staying home has broad implications that may not respond to the old playbook of easy money and fiscal stimulus.

When will it be safe to fly again? Airlines and hotels could go under. What if most of the shops on Main Street are closed for a month or longer? How will they survive?

Can everyone be bailed out? A 1 trillion dollar stimulus package is being discussed with the national debt already at record levels. This stimulus is roughly 6% of GDP so it is a big number, but will it be enough? It depends on how long the disruption lasts.

We must be realistic and acknowledge that this freeze on normal economic activity could bring layoffs and bankruptcies on a massive scale.

Bank of America Merrill Lynch is now forecasting 500,000 lost jobs in March, 3 million lost jobs through Q2, and a 12% year over year contraction in quarterly GDP.

Whether you choose to stay the course or sell your investments depends on your long-term objectives and short-term needs. In most bear markets, though, there are few places to hide. Normally, when investors sell risky assets, they buy safer government debt, or if they are really scared, they buy gold. Financial market dislocations are already surfacing with stocks, bonds, gold, and oil going down in tandem.

This time may indeed be different because we're restricted to staying home. People and businesses need cash to cover mortgages/rent, bills, and other costs. The longer we're hunkered down, the worse it gets for the economy. This is a potent combination of loss of income for many people at home and little economic activity in the outside world.

In my opinion, we must address the health crisis first in order to get the spread of novel coronavirus under control. Right now, that means social distancing and staying home, for as long as it takes. Once we feel safe enough to go out again and return to our regular routines, we can collectively save and stimulate the economy. Be careful and stay healthy!

Do you feel people are doing the right things to combat coronavirus? Are you worried and what changes have you made?

1 Trump says coronavirus crisis could last until July or August
2 California governor: Most schools likely out until the fall
3 I’m Bill Gates, co-chair of the Bill & Melinda Gates Foundation. AMA about COVID-19.
4 Italy sees 475 new coronavirus deaths – the highest one-day toll of ANY country – and infections shoot up by 4,207, erasing hopes the rate was slowing
5 How South Korea Put Into Place the World’s Most Aggressive Coronavirus Test Program
6 Scientists say mass tests in Italian town have halted Covid-19 there
7 South Dakota Halts COVID-19 Testing Due to Lack of Supplies
8 United States Small Business Economic Profiles for 2018