Black Friday and Cyber Monday are famous in the US for the big discounts and therefore big spending. In China, they created their own version called Single's Day — on November 11 or 11/11, which began as a protest of sorts against Valentine's Day, propelled by college students in the 1990s. To show the incredible buying power of the Chinese consumer, in just the first two minutes of shopping, over $1 billion was spent at Alibaba alone and by the end of the 24 hours, Alibaba's sales hit a record of $25.3 billion, more than 40 percent higher than Singles Day 2016. Yes 40 percent growth! JD.com, the #2 retailer in China, sold $19.1 billion!

These numbers are quite staggering. It is incredible from the 2nd biggest economy in the world and by far the biggest shopping day anywhere on the globe. To put it in perspective, here is a chart of Single's Day Alibaba sales vs the entire Black Friday weekend shopping in US. 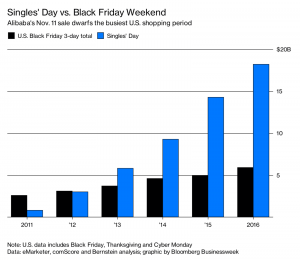 The rise of the middle class

The growth in sales clearly shows the rise of the Chinese consumer and according to Alibaba co-founder Josepth Tsai, “On Singles Day, shopping is a sport, its entertainment.”

“There are today over 300 million middle-class consumers in China. Every year, their disposable income increases, they are demanding better quality goods and want a better standard of living. This powerful group is propelling the consumption of China,” Tsai said.

One could easily make a case to be bullish on the Chinese consumer for the next 30 years. They are just starting to spend money on themselves and are looking to spend money on travel, electronics, entertainment and services. There is a huge runway for growth as their consumers are seeing rising incomes and they aren't saddled with debt like millennials in the US.

Alibaba is king of Single's Day

Alibaba is the huge beneficiary of Single's Day and they celebrate the lead up on Friday night with a huge gala featuring Nicole Kidman, Pharrell Williams and Maria Sharapova. It also showcased Alibaba's innovation with the company promising delivery within an hour for certain products and they converted nearly 100,000 stores across China into “smart stores” capable of processing payment using facial recognition and other advanced technologies. Using artificial intelligence, the first parcel was delivered in just 12 minutes to the doorstep of a resident in Shanghai thanks to algorithms and big data that helped to predict sales and calculate the best routes.

Among the many stats released by Alibaba, the following stand out: