As the father of a 5-year-old, I worry about the cost of college and I'm sure many parents of young children do. Prices at my alma mater, the University of Richmond, have risen close to 200% since I graduated in 1997. Has the quality of education also improved by that much? It's doubtful. While amongst friends, we laugh uncomfortably at the thought of million dollar tuitions, but one wonders if there has to be a breaking point where people just turn their backs on higher education. At what point is it unaffordable?

Since 1990, tuition grew at an average 6% a year, more than double the rate of inflation. The good news is that there are signs that this is slowing and hopefully for the long-term. Last year, tuition at college and graduate school rose 1.9% which was broadly in line with inflation and the slowest rate in decades. 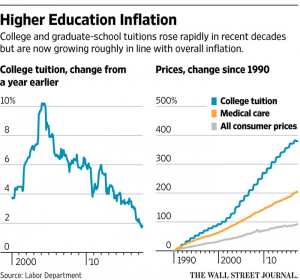 The trend for overall tuition is in the right direction: down. However it really is a tale of two cities, or colleges. The top tier colleges are able to demand higher and higher sticker prices; while the rest of the colleges are hitting a wall and perhaps having to heavily discount theirs. According to the US News and World Report, the nation's top 50 private universities are bucking the overall trend and upping their tuition by an average of 3.6%. Lehigh University is breaking the $50k barrier with a 5% increase for the new year.

On the other end of the spectrum, private college are offering deeper tuition discounts than ever before. Tuition discount rates for freshmen hit a record 49.1% this year, according to preliminary results from a National Association of College and University Business Officers survey of 411 schools. At schools with fewer than 4,000 students, the freshmen discount rate was a whopping 50.9%! This makes college shopping feel kind of like stepping onto a used car lot – you better be ready to negotiate to get the best price and never pay the full retail price.

Demographics will likely lead to a continuation of lower price increases. The number of new high-school graduates grew 18% between 2000 and 2010 but only 2% in the first seven years of this decade. The number of high-school grads is projected to remain flat through 2023. Furthermore, white graduates, the most likely among races to attend college, are expected to decline over this period.

Another factor pressuring tuitions is that the government is looking to cut its own budget. In the proposed budget for 2018, the White House proposed a cut in financial aid for students. The largest cut proposed is to the Pell Grant program by $3.9 billion – this program is the largest federal grant program which means that would-be-recipients will need to find another way to subsidize their college expenses.

“Indentured Student – Cartoon” by DonkeyHotey is licensed under CC BY 2.0