The International Monetary Fund urged the Federal Reserve to wait until the first half of 2016 to start raising short-term interest rates because the U.S. economy remains subpar. This is an unprecedented event as I can't recall a time that the IMF has ever tried to influence Federal Reserve policy. The IMF predicted the economy will grow 2.4% this year, down from its April forecast of 3.1% and the second time it cut growth targets this year.

“The FOMC should remain data dependent and defer its first increase in policy rates until there are great signs of wage or price inflation than are currently evident,” the IMF said.

Runnymede made the call early in the year that the Fed is unlikely to raise rates in 2015 and now consensus is falling in line. Investors currently expect the Fed to move in December, according to bets placed in the interest-rate futures market. I highly doubt that Janet Yellen will be the Grinch and pull a December rate increase. The bigger question is: will we see a rate increase in 2016?

For the past 10 years, the first quarter has typically been a weak quarter. Last year the first quarter saw an especially weak GDP at -2.1% before rebounding strongly with 4.6%, 5% and 2.2% in the following quarters. Unfortunately things aren't looking as robust for the 2nd quarter of 2015. 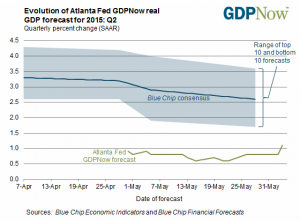 The Atlanta Fed's GDPNow model forecast for real GDP growth in the 2nd quarter is 1.1% on June 3rd, up from 0.6% on May 15th. If this forecasts holds true, the US economy will be essentially flat for the first half and will need an extremely strong second half to get anywhere near the IMF target of 2.4%.

With this slowing economic growth and the April CPI of just 0.1%, the writing is on the wall for the data dependent Fed — No rate hikes in 2015.

“New ECB Chief Lagarde to address plenary for first time” by European Parliament is licensed under CC BY 2.0