3 Investment Lessons from the Game of Thrones

Note: Don't worry I won't be issuing any spoilers in this blog post.

Game of Thrones fans are reeling after another shocking season finale with plenty of deaths left in its wake. This will be a long winter for all of us as we wait for the new season in 2016. Maybe we should start a petition for two seasons per year!

Today I won't be recapping the finale, there are plenty of sites for that sort of thing. Instead I will be looking at 3 investment lessons that you can take away from watching the Game of Thrones. Let's have at it:

1) Winter is coming and so is the next bear market

“Winter is Coming” is the motto of House Stark. The meaning behind these words is one of warning and constant vigilance. In a metaphorical sense according to George R.R. Martin, it more generally expresses the sentiment that there are always dark periods in each of our lives, and even if things are good now, we must always be ready for a dark period when events turn against us.

In the investment world, we know the “Bear Market is Coming.” A bear market is defined by at least a 20% decline. Of course recent bears have seen 50% declines and have been especially horrible.

Unfortunately bull markets don't run in a straight line up forever. Since the end of World War II, the average bull market has lasted just short of 4 years. The current bull is now in its 75th month and is the 2nd longest bull market in the last 60 years. Needless to say, it is long in the tooth and investors might benefit from de-risking a portion of their portfolio to take dampen the pain of the next bear market. 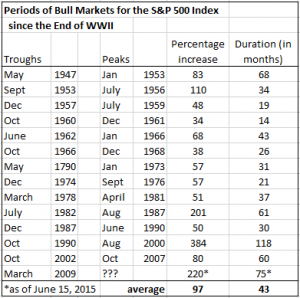 In the Seven Kingdoms, if your family name isn't Stark, Lannister, Baratheon, Targaryen or Martell, then you will never sit on the Iron Throne. Family lineage is paramount. How does this relate to investments? For one, there are many family businesses that have grown into huge corporations. Walmart is the biggest of the bunch. The Walton family still owns over 50% of the company which reported revenue of $485 billion last year.

Secondly when you are looking at a potential investment, you should focus some of your research efforts on the executive team. At Runnymede, we believe that you should invest with great management teams and their lineage matters. This comes in different shapes and sizes. At some companies, you will see upper management filled with lifers, employees that have risen to the top after many years. Their management teams often have 20-30 years of experience within the corporation. This makes CEO/CFO changes quite smooth because other employees know the business so well.

Sometimes you may find an older CEO looking for an exit strategy for their business. A few years back, I met with a software company with a CEO in his mid-60s. He was their long standing CEO and he said to me that he'd love to sell to Oracle if the price was right. He retired in 2013 but his company did sell out to Oracle last year.

3) The Iron Bank will have its due.

“One stone crumbles and another takes its place and the temple holds its form for a thousand years or more. And that's what the Iron Bank is, a temple. We all live in its shadow and almost none of us know it. You can't run from them, you can't cheat them, you can't sway them with excuses. If you owe them money and you don't want to crumble yourself, you pay it back.”  — Tywin Lannister

The Iron Bank of Braavos is the most powerful financial institution in the Seven Kingdoms. In the real world, the Iron Bank can be likened to the Central Banks: the Federal Reserve, ECB, Bank of Japan. I would guess that 99.9% of people outside of the investment world wouldn't be able to pick Janet Yellen out of a lineup if their life depended on it. In a recent NBC/Wall Street Journal poll, 70% of responses for Janet Yellen were “I don't know name/not sure.”

Despite being largely unknown by the general public, central bankers yield the most powerful financial weapons on the planet: control of short term interest rates and the printing press. Since 2008, the Fed has printed over $4 trillion and by the end of next year, the ECB and BoJ will likely have balance sheets on par with the Fed. While most retail investors have no idea who the central bankers are, they should know their influence on the financial market. For now, they are the likely reason why “Winter is Coming” a bit later this cycle, but you can only fight the inevitable for so long.