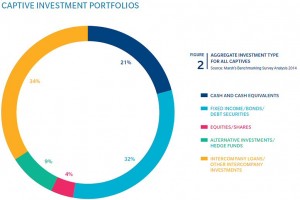 For those not involved in intercompany loans, the investment portfolio is designed to capture investment yield while maintaining adequate cash for liquidity and working capital. Not surprisingly, the portfolio looks similar to traditional insurance companies' portfolios dominated by fixed income investments. In the case of captives, fixed income investments are likely tied to the captive's long-tail liabilities. Maintaining cash and cash equivalents of 20% point to captives' need for liquidity. According to the study, only 4% of captives are investing in equities and 9% in alternative investments. While captives tend to be conservative in their investment objective, some captive portfolios display a wider range of investment strategies. While many captives invest exclusively in cash and cash equivalents, others employ much larger allocations to equity (30%+) and alternative investments, which include hedge funds and private equity investments.

Where applicable, Marsh expects the use of intercompany loans to increase over time as regulators are becoming more flexible with this practice. Today, 18% of captives are securitizing their loans which can take the form of mortgage/notes on real property and accounts receivables. Loan securitization “demonstrates an arm's-length, reasonable, and prudent mechanism, similar to how traditional insurers operate.” 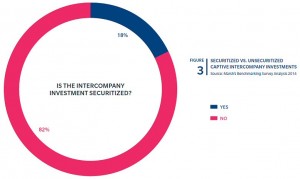 Looking at traditional insurers, Goldman Sachs Asset Management (GSAM), in its third annual insurance survey, questioned 233 life and health and P&C CIOs and CFOs. The survey indicated that more than one-third of CIOs intend to increase overall portfolio risk over the next 12 months, while less than 10% intend to decrease risk. There was a theme among CIOs that they believe “equity asset classes will outperform fixed-income assets.” Additionally, ranking asset classes expected to deliver the highest returns over the next 12 months, 26% said private equity, 17% said U.S. equities, and 13% said European equities. Government and agency debt (30%), cash and short-term instruments (24%,) and emerging-market equities (11%) were expected to deliver the lowest returns.