We all know that China has risen to the 2nd largest economy in the world; however how many China A-Share stocks do you own? The answer may surprise you. The answer is likely none. Even if you own an international ETF or mutual fund, the fact is that the main benchmark index MSCI doesn't include any China A-Share stocks from the Shanghai or Shenzhen exchanges, the 3rd and 8th largest in the world.

This is set to change as last year MSCI announced that China A-Shares will finally be included beginning in June 2018 at less than 1% of the MSCI emerging market index and many experts believe that within 5 years, they will move to full inclusion. This means that institutional investors will be forced to look seriously at A-Shares and fund flows should be a tailwind for the next several years. One way to play this trend is to invest in Kraneshares MSCI China A Share ETF (ticker KBA) which was launched in 2014. 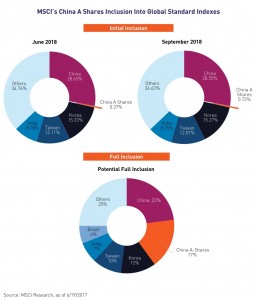 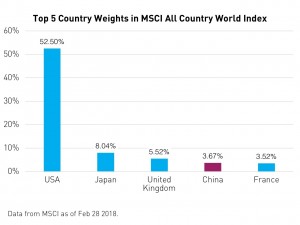 Despite being the 2nd largest economy in the world, Chinese stocks account for just 3.67 percent of the MSCI All Country World Index. The only Chinese stocks included currently are Hong Kong and US listed companies. China has only half the weight of Japan despite the fact that its economy is twice as large. We expect this large gap to close in short order but China will still be much smaller in comparison to the US weighting.