What a Greek bankruptcy means to your investment portfolio

A potential Greek bankruptcy has dominated the headlines over the past couple of weeks and this Sunday is a crucial referendum to decide their fate. The Greek PM Alexis Tsipras today urged its citizens to reject an international bailout deal. Many economists and investors are now expecting a bankruptcy in the near term. The big question for investors is: what does a Greek bankruptcy mean to my investment portfolio?

First of all, no one should be surprised that Greece is in financial trouble. Since 2009, Greece has been in crisis mode and it had to receive massive bailouts in 2010, 2011 and 2012. According to Harvard Kennedy School professor Carmen Reinhart, since its independence in the 1830s, Greece has been a state of default about 50% of the time. Yes you read that correctly, half of the time! Therefore, a Greek debt problem in itself should not cause you much fear or you would be living in constant fear.

The biggest risk that investors have to consider is the risk of contagion but this seems unlikely at this point. Contagion comes from a surprise element like Lehman's collapse in 2008. Lehman caused the financial system to grind to a halt as institutions worried about counter party risks. Today is a completely different situation. Over the past several years, investors and specifically banks have reduced their holdings of Greek sovereign debt to virtually zero. Therefore the risks of financial contagion are low. During the past five years, the IMF and ECB have absorbed most of the Greek sovereign debt in a backdoor bailout of European banks which held too much after 2008. Here is a chart of ownership of Greek debt. 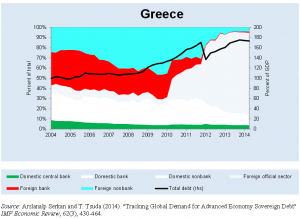 Impact on your portfolio

Unless you hold a Greek ETF or stocks, you probably won't notice much of an impact on your investment portfolio. The US market has seen a pickup in volatility over the past week but our economy and financial institutions have little exposure to Greece. With the turmoil in Europe, we could see further appreciation of the US Dollar and downward pressure on the Euro as the ECB will keep its policy loose or may even seek ways to loosen it further. A stronger dollar may increase the likelihood that the Fed will not raise rates at all in 2015 and will maintain rates at zero. Traders are now pricing in just a 10% chance of a rate hike at the September meeting.

So don't worry too much about the July 5th referendum and just enjoy your Independence Day celebrations!