Why I Walk at the March for Babies 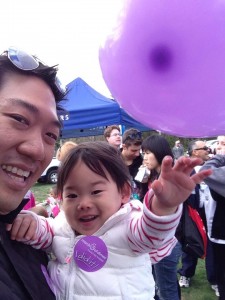 Last month, Apple's Tim Cook made headlines as he told Fortune magazine that he plans to donate his estimated $785 million fortune to charity — after paying for his 10-year-old nephew's college education. Cook said, “”You want to be the pebble in the pond that creates the ripples for change.””

While the average person doesn't have millions of dollars to give away, it is important to have a meaningful life and make a difference in the world. One way to do this is to find a worthy cause that resonates with your soul. Whether you donate unneeded household items, give money, or volunteer your time, there are many ways to get involved. In the end, you will help create the ripples for change, and you will create more joy for yourself while you are at it.

In 2013, Runnymede helped raise money for charity: water after we learned that every day, 5,000 children die from water-related illnesses before they reach their fifth birthday. We were proud to raise over $1000 which brought over 20 people clean water in India and changed their lives forever.

Last year, my family participated in the March for Babies (formerly Walk America) for the first time and it was an amazing day. The March for Babies originated in 1970 as the first charitable walking event in the US. Last year, over 7 million people were expected to participate and the event has raised more than $2 billion since its inception. Proceeds help fund research to prevent premature births, birth defects and infant mortality. Like my kids, more than half a million babies are born prematurely in the US. It's time to lower that statistic!

The March for Babies is important to us because on April 20, 2012, our twins were born prematurely at just 25 weeks. Before their delivery, my wife received a prenatal steroid shot for fetal lung development. This breakthrough treatment was developed through March of Dimes funded research.

Our son Julian earned his angel's wings and our daughter Chloe had a long stint in the Morristown Medical's Neonatal Intensive Care Unit (NICU). Chloe was born weighing just 1lb 11oz and had to fight for survival on a daily basis. While Chloe's NICU stay had many ups and downs, we carry many fond memories thanks to her incredible primary nurses who kept a watchful eye on her 24 hours a day. We are forever grateful for their loving care along with the NICU doctors and staff.

Thanks to research from the March of Dimes and others, miracles happen every day in the NICU. This isn't an exaggeration. Chloe had surgery to fix a hole in her heart at just a week old. When you are an adult, surgery is worrying but imagine this when your daughter is so tiny and frail. The doctors and nurses are miracle workers!

After 119 days in the NICU, Chloe came home to us and she has thrived. She just celebrated her 3rd birthday and she loves to laugh! Recently she began taking soccer (or as she calls it foot class) and gymnastics and she is having tons of fun.

We are looking forward to our second March for Babies walk this Sunday in NJ. We are proud to have raised over $9000 in the past two years and Chloe is the #1 fundraiser in the county as of today. If you'd like to donate to her walk, please click the button below.

Every day, thousands of babies are born too soon, too small and often very sick. Let's do something about this! Find a walk that is close to you. It will be an inspiring day for everyone. Thanks for all your love and support!

It doesn't have be the March for Babies either. Find a cause that is near and dear to your heart. As Gandhi said “Be the change that you wish to see in the world.” Let's all help change the world for the better!