Investors are always on the hunt for a reliable market indicator which signals a market top. In my mind, asset protection is often an underappreciated skill in this business because so few people have been able to repeat the skill time and time again. Every cycle is slightly different so it is certainly a challenge, but I believe it can be done and with huge value added.

Earlier this month on CNBC, famed hedge fund manager Jim Chanos shared a chart which shows that shares of Sotheby's (BID) have peaked before every major financial bubble since 1987. 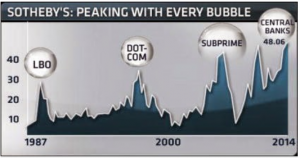 Chanos made a name for himself for his early awareness and short position of Enron's problems which he raised issue with in 2000. This time he believes that the contemporary art market has gone “bonkers” under the Fed's easy money policies. The stock is already down 25% this year and is showing no signs of reversing. The Fed tapering, which started in January, may already be causing the bubble to burst. 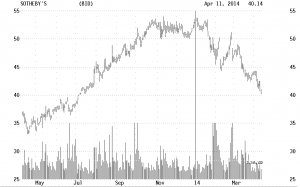 Should you trust the Sotheby's indicator?

So is this a useful indicator or just a coincident indicator that can be ignored? While no one indicator is perfect, this one is a great confidence indicator of the super rich. It makes sense that art auctions reflect irrational exuberance during market bubbles. Periods of record bidding are scarily accurate bubble predictors, according to Vikram Mansharami who wrote Boombustology. He says that they're a “symptom of overconfidence and hubris” as a newly rich society spends its easy money with exponential flamboyance.

This doesn't mean that it is a simple indicator to use. While Sotheby's can signal a market top, the timing of a downturn isn't always the same as identifying bubbles. Pinpointing exactly when a bubble will pop is notoriously difficult. In the Internet bubble, Sotheby's turned down a full year before the S&P 500.

Chanos argues that we are currently in a central banking bubble. This bubble could be even more slippery.

Is it a rig or manipulation or whatever? Are equity prices now part of the Fed's mandate? And are asset prices part of the Fed mandate? It seems that they are… We are in uncharted waters.

While the Fed has started to slow its asset purchases, it's still buying $55 billion per month. Furthermore the ECB's Mario Draghi has stated publicly that they are prepared to ratchet up QE and perhaps drop interest rates into negative territory. The central bank bubble may not be ready to pop just yet.

Chanos is sticking with his Sotheby's indicator. He has a short position against Sotheby's and he advised art investors to hedge their art purchases.

What will you do?