Junk bond sell off reminiscent of subprime in 2007

As the Fed prepares to raise rates for the first time since 2007, the corporate high yield debt market, aka the junk bond market, is in serious crisis mode. The talking heads on TV say that everything is fine if you exclude energy but this is eerily similar to them saying that the S&P is fine excluding financials in 2007.

People are too long credit and credit is melting down and the stock market is whistling through the graveyard. It is so similar to 2007, it's scary.

Runnymede warning is spot on

In January, I warned exactly this saying “Subprime in 2007, Junk Bonds in 2015.” Thanks to the Fed's zero rate policy, investors have been chasing yield in risky assets because safe assets paid nothing. This works until there is stress in the system. And the system is at its breaking point. In 2007, the subprime crash was caused because investors didn't properly account for risk of the underlying assets of collateralized debt obligations (CDOs). Over the last several years, investors have been chasing yields with the assumption that those yields would never go down. However, many of the energy companies are cutting dividends substantially or not paying at all. Energy junk bonds get more risky as oil prices continue to hit cycle lows.

Funds are shutting down

In the last few days, several high profile high-yield bond funds have been forced to shut down. This is a serious warning signal and the first domino to fall. Third Avenue announced that it would gate investors (stop redemptions) in a $788 million mutual fund and it plans to liquidate the entire fund over the next several months. Two other funds, Stone Lion Capital and Lucidus Capital Partners, have also suspended redemptions and plan to liquidate. This is just the start of a run on junk bond funds.

In the meantime, ponder the idea that there are still 19.6 million more shares of HYG and 41 million more of JNK than existed at the end of last year, and ask yourself what those holders are going to do in the coming weeks.

Then ponder on what professional holders of high yield and other credit will do after having gorged for the last several years only to see the wheels finally start to fall off.

With JNK and HYG down over 13% year to date, they are showing no signs of rebounding.

Credit is a key driver of the business cycle. So many investors look for shifts in credit risk which can contribute to a sequence of events that culminate in a recession. Here is a chart of high yield spreads versus Treasuries. 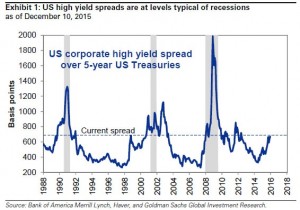 As you can see, credit spreads start to widen before a recession takes hold and narrows as the recession draws to a close. While there have been false signals, we continue to believe that recession is likely in 2016 and investors should continue to de-risk their portfolios to protect themselves from significant downside risks.

“Junk bonds stock photo” by lendingmemo_com is licensed under CC BY 2.0