Is the Fed rate hike a big mistake?

The FOMC is set to meet on December 15-16 and the market is finally buying the rhetoric that a rate lift off will begin this month. While Fed chair Janet Yellen has been hinting at a potential rate increase for much of the year, the financial markets are now pricing in the reality. Economists can argue whether it is the right or wrong decision, but the fact remains that the Fed is now highly likely to raise rates for the first time since June 2006. As you can see the 90 day T-bill rate is moving up sharply in anticipation. 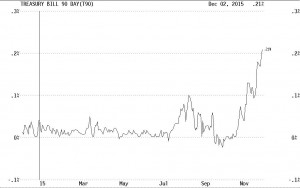 We have been writing for much of the year that the Fed shouldn't raise rates because inflation is near zero and growth isn't very strong. On the other hand, Yellen has essentially talked about a rate increase so much that she feels compelled to act. This could be a move that starts a new bear market because she will be the first Fed chair to raise rates into slowing growth and declining manufacturing data. The data dependent Fed seems to be ignoring some very important data.

Here is the Fed's GDPNow expectations. For the 4th quarter, the GDP forecast has crashed to just 1.4% growth. That is flat out ugly.

Furthermore, the US manufacturing data is also poor. In November, the PMI registered a weak 48.6. Anything below 50 is considered contracting and that was the first time the PMI was below 50 in 3 years. In the chart below, one can see that manufacturing has been slowing since the 4th quarter of 2014 and is now signalling a potential recession.

Regardless of this data, in recent days, Yellen and the Atlanta's Fed Dennis Lockhart have echoed statements that barring anything “drastic,” the Fed is going to raise rates in December. On Wednesday, Yellen said that she was “looking forward” to a US interest rate rise that will be seen as a testament to the economy's recovery from recession. She expressed confidence in job growth and reaffirmed her view that inflation would moderate next year. Lockhart said that it would take a major negative turn of events to change his opinion that the Fed's extended stay at the zero lower bound should come to an end.

For investors, the result of a rate hike is a bit murky. One thing that one can guarantee is increased volatility. After Yellen's comments, the market sold off and that trend continued. The VIX which is referred to as the “investor fear gauge” shot up 14% on Thursday. Brace yourself for a bumpy road ahead. If 2016 plays out as we expect, recession is near and the Fed is likely making a big mistake by raising rates which would push us even faster into a slowdown.

“The four capital mistakes of open source” by opensourceway is licensed under CC BY-SA 2.0